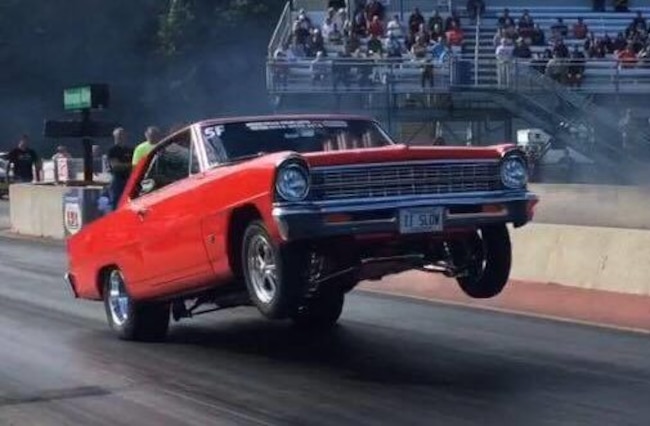 Sitting in the stands of Lucas Oil Raceway in Indianapolis, the fans Gear Vendors HOT ROD Drag Week, powered by Dodge, watch a beautiful bright red 1967 Chevy 2 Nova roll into the beams. Hilborn stack injection pokes through the hood as it rolls out of the water box, and smoke rolls from the now-warm tires as the car lights the staging bulbs. The yellows flash and the car launches hard. Both front wheels leave the ground in a big wheelie and the car launches forward. At the end of the track the time clock lights up 9.98@132mph.

Pulling a trailer is nothing new on Drag Week, but Josh Norris brings a certain amount of style with his custom trailer and those awesome stacks up front.

In the pits, the long time gearhead parks the little red Nova and revels as he just ran the cars first official 9-second pass. The large wheelie and personal best were both done this year while attempting his second Drag Week in 2016.

23 years ago, Josh and his dad were walking through a car show when he stumbled upon the car for sale. He knew at that moment he needed to own the car and was able to strike a deal. Josh drove the car for 10 years he then decided to "fix a few things," and 10 years after deciding to fix the Nova. The time in the body shop, machine shop and assembly shop where Josh did most of the work on the car himself, with the help of friends and family seems to have paid off.

Hilborn in all its glory, notice the synchrometer for setting up the individual butterflies.

The bright red paint covers the Nova from top to bottom. Under the hood sits a 434ci Small block Chevy. The engine is a 10.8:1 naturally-aspirated pump gas motor that makes 630hp and 600 lb-ft. of torque. Behind the small-block is a TH400 transmission with a Gear Vendors overdrive unit.A 9" Ford with 4.11 gears rounds out package.

One of the coolest features and most distinct features of the car is the Hilborn Stack Injection System. This unique piece sticks through the hood with 8 individual "stacks", and provides an ultra trick look. A Holley HP EFI system controls the fuel and ignition. The package makes a stout street car with more left in it.

Josh is co-owner of Rustbucket Restoration with his co-driver Rob Senkyr. Rob had been co-pilot on twoprevious Drag Weeks and after talking with him and watching the live feed, Josh decided he wanted to try it. So in 2015 Joshua entered his Nova in the Modified NA class.

The Nova performed well and netted him a 3rd place finish in class. Returning in 2016 the car once again worked flawlessly and Josh finished the week in 5th place in a very difficult and fast class.

After completing Drag Week this year Josh immediately entered into a Drag Weekend type event and finished in 1st place with a 9.87 second average, this netted the Nova around 2,000 miles and 20 passes down the track in a little over a week, and the car didn't skip a beat. Josh is now working on changing the suspension in the car so he can compete in Street Race Small Block N/A for 2017, and this should help him become more competitive in a still very heated class.

Josh hopes to be back in 2017 and says he couldn't do it without the help of his daughter Paige, Rob Senkyr is co-pilot and business partner, and all his friends and family that have helped along the way.