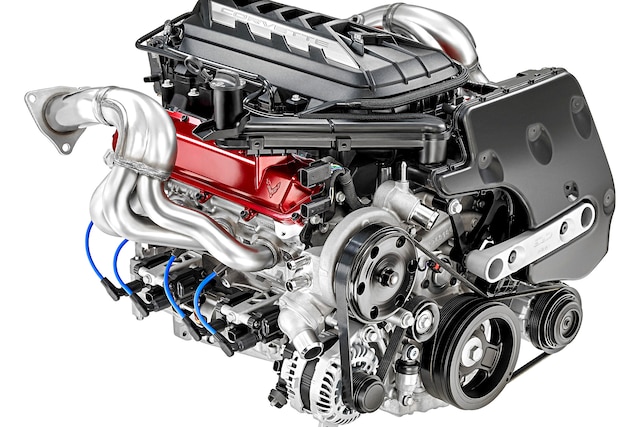 "A Corvette engine" those words have struck excitement in the heart of hot rodders and sports car guys ever since 1955 when popping the hood meant getting a look at the new base level 195 horsepower 265-inch small-block V-8.

Producing 300 horsepower more than 1955's base V-8 engine the 2020 Stingray's base heart is Chevy's next-generation 6.2L small-block V-8 LT2 engine, the only naturally aspirated V-8 in the segment. It will produce 495 horsepower (369 kW) and 470 lb-ft (637 Nm) of torque when equipped with performance exhaust — the most horsepower and torque for any entry Corvette.

"Though now placed behind the driver, the LT2 gives the same visceral experience we all expect from Corvette," said Jordan Lee, GM's global chief engineer of Small Block engines. "The LT2 has been designed to deliver excellent low-end torque and high-end power to give thrilling pedal response at any RPM."

The powertrain's low position enables a low center of gravity for optimal handling. Perhaps the biggest update is found in the lubrication and ventilation system. For the first time ever, the base Stingray will use an engine-mounted dry sump oil system and three scavenge pumps for improved track performance.

During serious track driving, oil volume remains high to avoid diminished performance. The new Stingray's lateral capability is greatly improved, so the LT2's dry sump lubrication system had to be redesigned to provide exceptional engine performance even at lateral acceleration levels exceeding 1G in all directions.

A lightweight, 3.2mm-thick glass panel on the rear hatch allows owners to show off the engine. This panel features a cantilevered trailing edge to evacuate heat from the LT2 engine compartment.

Other notable engine characteristics include:

Jewel-like setting in the rear compartment, visible through the rear glass hatch.

hoses, exhaust manifold and even the bolts and fasteners, is built with appearance in mind. All engine components were given careful consideration just like the exterior, and even the heat shields are textured.

A brand-new block and vent system. The centerline of the crankshaft sits an inch lower to the ground where it mates to the transaxle for better handling.