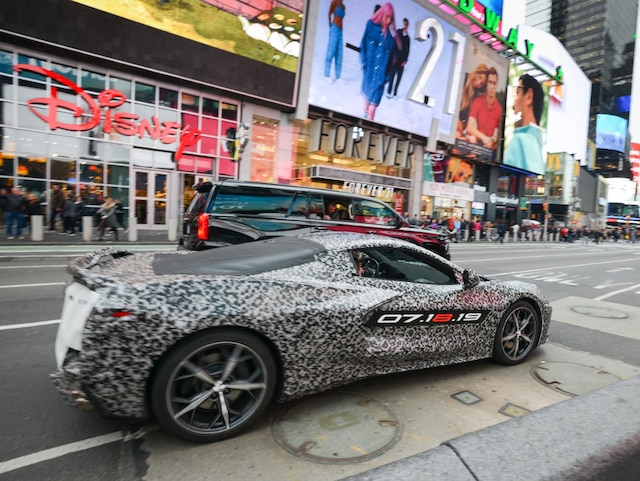 In what has been likely been the best kept secret in the world of cars since the dawn of the automobile the midship C8 Corvette will make its global debut on July 18, 2019. Surrounded by black Suburbans with a sharp nose that makes a C3 Corvette look like a butter knife the C8 Corvette cruised Times Square in camo-wrap with GM CEO Mary Barra riding shotgun.

Chris Bonelli, of GM Product and Brand Communications emailed MotorTrend editor, Ed Loh, “Wanted to make sure you saw the exciting news we just posted to our Chevy social channels. Our CEO and Chairman Mary Barra was driven to a Stephen Siller Foundation gala in NYC in a Next Generation Chevrolet Corvette this evening. We’re happy to end the speculation around the Next Gen Corvette when the car makes its global debut on July 18, 2019.

We’ll have more details to share soon, but if you’d like to post something in the meantime where photos of our development car cruising through Times Square will be posted shortly. A b-roll package will be available later tonight in addition to some corporate news Mary will announce.”

So, there you have it, it’s 5A.M. California time I think I’ll jump in my triple black Z-51 C4 and head south on PCH.