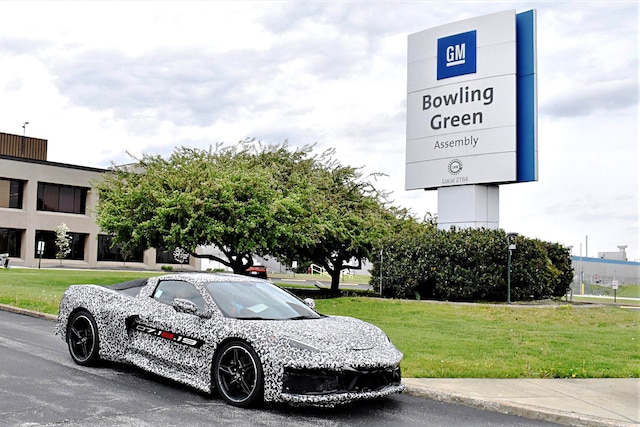 In 1998 the C5 Corvette Registry and the Chevrolet Corvette team introduced the Birthday Bash at the National Corvette Museum. That Bash celebrated the 1998 C5 Corvette convertible being selected for the Motor Trend Car of the Year Award. In addition the Corvette Team brought examples of the 1999 upcoming Corvettes for owners to inspect. The Bash was so popular that it became an annual tradition of giving Corvette owners a peak at future Corvette models. This included; 2009 fixed roof coupe, 2001 Z06, 2003 Commemorative Edition, the 2005 C6, 2006 Z06 and the 2015 Z06. Each were revealed at the NCM Bash before they were introduced to the public. Check out www.corvettemuseum.org for upcoming museum events.

Everyone was wondering if the Corvette Team would continue this tradition and surprise us. As in previous years a large number of Corvette Team members from Michigan and Kentucky attended the 21st Bash. They shared sales results and updated attendees on current model changes. Tadge Juechter-Corvette Chief Engineer and Harlan Charles-Chevrolet Corvette Product Marketing Manager detailed the design, performance and sales results of the current C7. Tadge also discussed the New York City appearance of GM’s CEO Mary Barra riding to a charity event in a C8 mid-engine prototype. Tadge explained how it was done and how many black SUV’s it took to surround the prototype as it made its way to the event on busy city streets. Tadge drove the Corvette and it was obvious that he enjoyed the experience. During their NCM presentation, Tadge mentioned that they have built almost 100 pre-production C8 prototypes. One of these C8’s was two years old and it was parked in front of the Corvette Assembly Plant. It was there to highlight a press conference with GM’s Mary Barra on Friday April 26. Ms. Barra announced that GM was adding 400 new positions and a second shift to build the C8 Corvette. After the press event Bash attendees began asking if the prototype would make an appearance at the museum. Word quickly spread that it would make a slow lap around the museum entrance at noon on Saturday. A large crowd gathered and at the scheduled time the C8 was slowly driven around the circle to allow attendees to take photos. As it returned to the highway it disappeared with a burst of acceleration. The Bash tradition was maintained thanks to the Corvette Team. It was an exciting experience for the Corvette owners and fans who were attending. We included photos of the car as it toured around the museum drive and the C8 in front of the assembly plant. We noticed a small white sticker on the passenger window of the plant C8. This sticker was not on the one that toured the NCM driveway. Were they different cars? We also included photos of the New York City C8 that revels more features of the new Corvette for you to study. To stay up to date on news on this exciting new Corvette go to https://www.chevrolet.com/upcoming-vehicles/next-generation-cor.

The C8 on display before Ms. Barra’s press conference displayed a small window sticker on the passenger window on Friday.

The new C8 emblem is more swept back than was seen on the previous C7 Corvette.

This was the moment when the C8 prototype entered the NCM entrance. The crowd was busy with their cameras to capture this historic moment.

Notice how short the front is compared to the C7. There is a much larger gap between the ends of the door to the rear fender opening.

While the shape is heavily camouflaged, this profile view demonstrates how much this car differs from the current C7.

The rear clip is more rounded and the quad exhaust tips exit at the far ends of the rear instead of the center in the current C7. Cabin heat should be improved with the engine heat behind the passengers.

The hole at the top of the rear window might be for a camera or a high mounted stop light. Notice the large crowds lined up in front of the National Corvette Museum.

In this view we did not notice the passenger window sticker that was seen on the C8 that was parked in front of the Corvette Assembly Plant.

The black covering makes the front look very awkward, but we are sure it will appear much more aerodynamic after it is reveled without camo.

The instrument panel appears to be much flatter than the one on the C7 Corvette.

The rear wing looks like it is covered with foam. Our guess is it will be much flatter when it is revealed without its camouflage. There might be a storage space behind the engine.

The C8 was escorted by black SUV’s as it made its way to the New York City charity event. It looks like there might be room for two round taillights? That would be a surprise.

The C8 prototype that Tadge drove in New York shows openings in the nose and the production appearing wheels.

Tadge told the Bash audience that the New York producers mounted LED lights underneath the roof to light up the passengers.

Tadge can be seen in the lower right explaining that the arrows point to stickers of Zora Duntov. Tadge applied these at the last minute to pay tribute to the father of Corvette.

This view shows the large air openings in the nose and the outline of the front trunk opening.

These are the actual factory emblems that will be available in silver or black.

GM is using this link to keep Corvette fans informed of the latest information on the new mid-engine C8. https://www.chevrolet.com/upcoming-vehicles/next-generation-cor.

Photography by the Author & GM