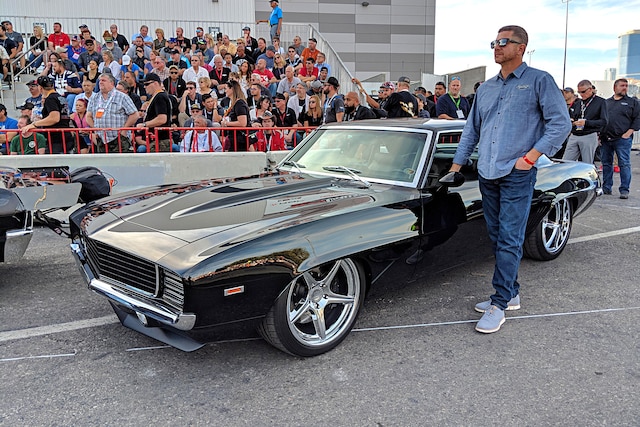 Nine years in the making. That’s how long Detroit Speed kept Stuart Adams’ 1969 Camaro, known as TUX, beneath tight wraps while it was under construction. Very few, even industry insiders, knew of the ’69 Camaro before it debuted at the 2018 Detroit Autorama in the Pirelli Great 8, contending for the Ridler Award.

Next, TUX went on to win Goodguys Street Machine of the Year followed by Best Street Machine at the prestigious Painless Performance Products Triple Crown of Rodding presented by Street Rodder. Street Rodder magazine’s Triple Crown of Rodding takes place within Shades of the Past Hot Rod Roundup at Dollywood’s Splash Country in Pigeon Forge, Tennessee.

Rounding out a very successful year on the show circuit, it was Friday, November 2, 2018, at the SEMA show in Las Vegas where TUX, in a field of 300 contenders, broken down by elimination into 12 finalists, won SEMA’s Battle of the Builders title. The 2018 SEMA Battle of the Builders competition will be broadcast Monday, January 7, 2019, at 10 p.m. EST on the Motor Trend Network.

Chevy High-Performance interviewed Detroit Speed’s Kyle Tucker about the Camaro’s earliest beginnings to where it ended up. “TUX started off as a green-on-green 1969 Camaro coupe, which we found in Louisville, Kentucky, back in 2005. It had a 307ci engine with a Powerglide transmission and the ugliest hubcaps you could pick as an option,” Tucker states. “But it was a survivor car that had not been modified and it was a solid car to start with. The plan was for the car to look very simple and original from the outside. I would say achieving the ride height and keeping the car at that ride height at all times became a challenge as we built it. The car’s roofline is less than 48 inches off the ground. The level of detail was held high and very consistent throughout the build.”