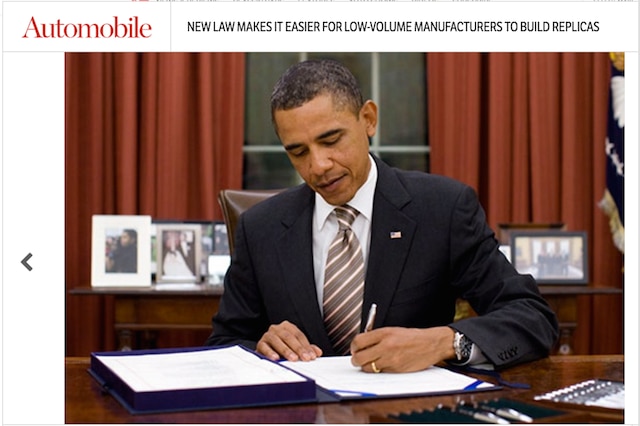 It was great news way back in 2015 and a pleasant surprise President Obama had signed an auto enthusiast friendly bill into law, legislation that would have permitted low-volume car manufacturers to produce turnkey replica vehicles for customers nationwide, but years have passed and not another word has been heard.

Who dropped Obama’s ball? On November 29, 2016, President-elect Donald Trump nominated Elaine Chao to serve as Secretary of Transportation. It’s late 2018 and DOT Secretary Chao needs to hear automobile hobbyists and enthusiasts would like her to tell the Federal Government, NHTSA to quit stalling replica vehicle production.

In SEMA SAN words, “Congress passed a 2015 law to remove regulatory barriers that have prevented you from purchasing turn-key classic replica cars. While the U.S. Department of Transportation (DOT) had until December 2016 to implement the law, they haven’t even published a draft regulation. It’s time for the federal government to get out of the way, so that you can purchase a brand-new replica vehicle. DOT Secretary Elaine Chao needs to hear from you!”

This SEMA-supported provision was a part of a larger highway construction bill. Rep. Markwayne Mullin (R-OK) and Rep. Gene Green (D-TX) introduced the “Low Volume Motor Vehicle Manufacturers Act of 2015” in June, legislation that SEMA has pursued since 2011.