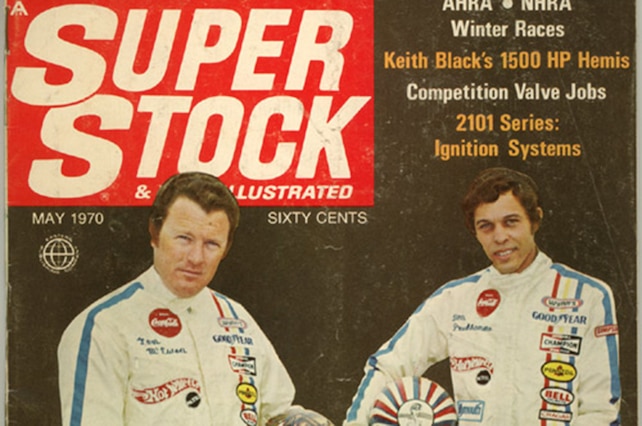 Like many of you that grew up in the late ’60s and early ’70s, my first contact with cool cars was Hot Wheels—the little die-cast cars that looked like some of the baddest muscle cars on the streets, only smaller. I remember these little metal cars appearing on the shelves of toy stores in 1968. It was a huge game changer. Unlike the toy cars previously offered for kids, Hot Wheels cars actually looked cool, and the use of shock-absorbing piano wire axles along with big, fat wheels made them roll faster and smoother than any other toy cars available. The one-of-a-kind bright-orange track held together with purple track connectors upped the fun factor tenfold. My friends and I would spend hours upon hours racing these cars to see whose was the quickest. Fortunately, I knew getting dirt in the wheels would slow them down, so these cars were designated as indoor-only, which explains why I still have quite a few survivors in great condition.

In 1970, Hot Wheels introduced the Mongoose and Snake Drag Race Set. It was then that Tom “Mongoose” McEwen and Don “The Snake” Prudhomme went from obscure West Coast drag racers to instant celebrities to just about every kid in America. The Hot Wheels Mongoose and Snake television commercial shown during Saturday morning cartoons raised them to superstar status. Even parents knew of Mongoose and Snake, as these drag racing sets were on just about every kid’s Christmas list. Not only did the two drag racers gain national attention, but the deal with Hot Wheels also gave the sport of drag racing a major boost.

Although the Mattel sponsorship only ran from 1970-’72, they secured Carefree sugarless gum as a sponsor for 1973. At the end of that season, the Snake and Mongoose’s racing corporation—Wildlife Racing—dissolved, but their rivalry lived on as strong as ever.

Throughout their racing careers, whenever the two staged up against each other on the dragstrip, even for just a qualifying run, it was special. This was a race everyone wanted to see. Every fan would be on their feet to witness the biggest rivalry in drag racing: Snake vs. Mongoose.

Although Tom McEwen stopped racing competitively in 1992, he was still involved in the sport as a color commentator at various races and later as Associate Publisher and Marketing Director for Drag Racer magazine.

In most people’s eyes he was a drag racing legend, but he didn’t see himself as such. He admits to not having that “killer instinct” in every round of racing like Prudhomme, Don Garlits, and others had. Having fun in life was important to McEwen, so he didn’t take drag racing quite as serious as some of his competitors.

Coming in at number 16 on NHRA’s Top 50 drivers of all time, McEwen won only five national events in his 35-year racing career. In comparison, Prudhomme—listed at Number 3 in NHRA’s Top 50—has 49 event wins to his credit (14 in Top Fuel and 35 in Funny Car.)

I met Mongoose through some friends, being at some nostalgia drag races, and because we worked in the same industry. Although he was a childhood hero to me, as I got to know him over the years I saw a person who truly cared about friendships and the people around him. When we spoke he would usually ask about how I was doing, how work was going, and life in general. His sense of humor was quick and dry, so you had to be on your toes to keep up. Our phone conversations were usually short, but the fact that he took the time to call every couple of months and chat for just a few minutes meant a lot to me. To call Tom “Mongoose” McEwen a friend was an honor, and yes, to me he was a legend—a legend that I admired and looked up to from a very young age. As an adult, I still looked up to him but for different reasons. If I said I wasn’t even a little bit star-struck, that would be a lie. After all, he was the freaking Mongoose!

NHRA’s Phil Burgess interviewed McEwen a few years ago and asked him how he’d like to be remembered. “As a good guy, kind of a smart aleck guy who liked people and enjoyed what he did,” said Mongoose. “I was serious at the track but had fun away from it.”

Tom “Mongoose” McEwen passed away on June 10, 2018, at the age of 81. He was a drag racing pioneer whose contributions helped catapult drag racing to a higher level of success.

A legend like him will be missed by many and I’m sure we can come up with all the clever clichés about how “he’s gone to the dragstrip in the sky with all the great ones,” but the Tom McEwen I’ll miss is the one who liked to eat lunch at the same place on certain days of the week and the one who complained about his doctor telling him to cut back on this or that and how he needed to watch his weight. He was truly one of a kind.

Wherever you are, I know they’ll appreciate a guy like you; a little bit of a smart aleck who likes to have a good time.

Mongoose and Snake appeared on the May 1970 cover of Super Stock & Drag Illustrated with the headline “Hot Wheels $250,000 Bonus Babies; Will They Revolutionize Funny Car Racing?” Yes, they did.