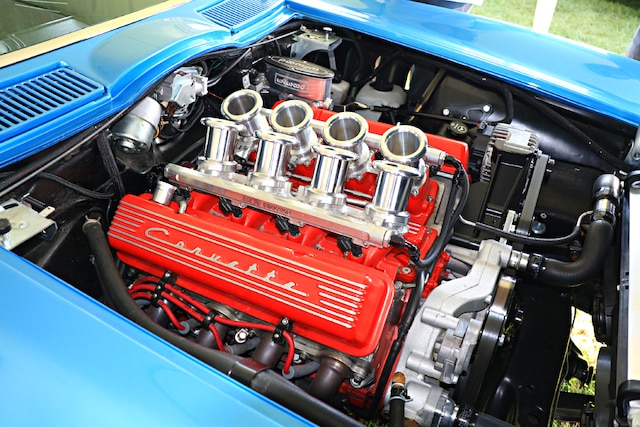 The heart of a Corvette is its Corvette engine, and there were over 5,000 Corvettes in attendance in Carlisle, Pennsylvania during Corvettes at Carlisle held August 23-27, 2018. One never knows what engine to expect under the hood of a Corvette unless of course the engine is bulging out through the hood like the Incredible Hulk wearing a pair of too small Speedos.

Maybe that description is just a bit too much, but click a journey through these photos we took during Corvettes at Carlisle last weekend, and see if you can’t find the Corvette engine you’d like to have under the hood of an old or new Corvette.

Our lead photo is a Borla 8-stack equipped Sting Ray with PML cast aluminum valve covers. Notice Borla’s Sting Ray has OEM style spring clamps on the heater hoses. Next in line is a pearl white C3 Stingray with enough gold plating on its blown Rat engine to cause a gold shortage in South Dakota’s Black Hills. Next a ’57 Corvette convert (that’s all there was then) with 9-fin Vette valve covers and a fuel injection setup that almost looks stock.

Pretty in black another blown Rat powered car we spotted Corvette number four in Corvettes at Carlisle indoor “Vette Rod” exhibit. We forgot to ask what the little bonnets are over the dual quads on this white ’57, but we did notice it has 1960-up non-staggered seven fin valve covers. Corvette engine bay number seven is a survivor in what Wayne Carini would probably describe as in “honest condition.’ Next a black C4 with an LT1 engine all prettied up and with somewhere to go. Okay here’s a question for you guys that really know all about the early Corvettes this one has 9-fin valve covers and fuel injection. The question is would a fuel injected ’57 283 have come from the factory with 9-fin valve covers? Okay another early question for the experts, is this a 1956 265, or a 1957 283?

On engine number 10 we know this is a factory stock air cleaner as found on 1959 245HP, and 270HP 283s. On engine number 11 we found this clever owner adapted Scuba gear to function as his Corvette engine’s air cleaner. For engine number 12 we’ll take an educated guess, and say this Corvette engine is a 327… don’t ask how we know. Lucky number 13 is definitely not a stock engine under the hood of a Fawn Mist ’62. Engine number 14 proves one doesn’t know how detailed an engine bay can be until they pop the hood. Ditto for number 15’s engine bay in this black C5. Yeah buddy, number 16 is an early car powered by a late engine. And for number 17 ditto a Sting Ray with late model power. And engine number 18 under the hood of a C3 how would you describe it other than badass! Nineteenth nervous breakdown, don’t squeeze the Charmin Mr. Whipple on this pure white Whipple blown C3.

Give us a yahoo Corvette engine bay number 26 is sporting a very interesting Edelbrock E-Force supercharger setup. The engine bay of Corvette number 27 is a very sad story the owner’s wife thought she was driving their Corvair and thinking it was the trunk she placed a one-gallon container of guacamole under the hood… it exploded coloring everything avocado green.

Lots to see here people engine bay number 28 is a C4 ZR-1 enough said. Under the hood of engine bay number 29 the owner thought yellow might be a good color, if not he can always repaint it, right? And for engine bay number 30 we’re revisiting the ’53 Corvette with the 572 to remind them to remove the cute little black hat from the carburetor before they fire that monster up.