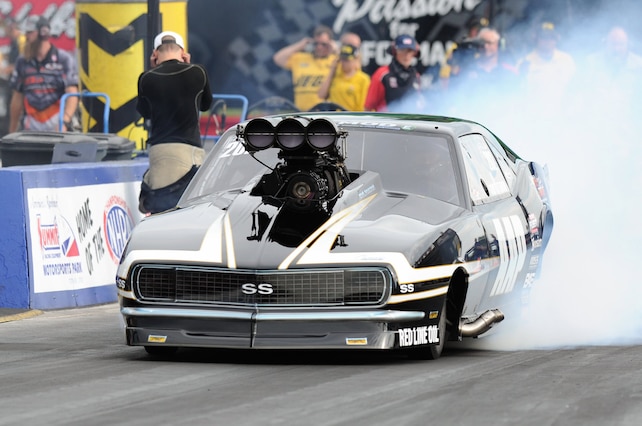 There are few things on this green earth that I like better than seeing 30+ Pro Modified cars attack the quarter-mile during qualifying at NHRA Mello Yello Series national events. It is one of the single greatest shows in drag racing, and just when you think that it couldn’t get any better, it does. The participation in the class continues to grow. Racers are leaving other series to come into the NHRA fold, and the equipment keeps getting faster and faster each year.

For those of you that do not know, Pro Modified is a drag racing class that is unique to the sport because of the fact that it is populated with full-bodied cars running heads-up and a multitude of engine combinations are used. By the NHRA rules, 900+ ci engines that use nitrous as a power-adder are allowed, blown alcohol engines that measure to just over 520 cubic inches are allowed, and turbocharged engines of the same 520ci size are also part of the game. Rumor has it that centrifugal superchargers will enter the fray in 2019, which would give fans another combo to root for.

With over 30 entries on the list at any given event, simply qualifying for the show is an accomplishment in and unto itself. Regularly, points leaders do not make the cut. Regularly, past class champions are spectating on Sunday. And regularly, we are all shocked to see that the unqualified cars could effectively have their own awesome event in and unto themselves.

All of this stuff makes me really nervous for the long-term future of my favorite class. Seems like the dumbest thing, right? Wrong.

Does anyone remember what Pro Stock looked like in the early 2000s? It looked pretty much exactly like Pro Mod does now. Among the number of cars showing up, the number of people providing engines, the number of chassis builders making cars, and the killer qualifying action, there are many parallels. While Pro Stock has never been as wide open as Pro Mod in terms of the number of winners, it was a radical show that everyone loved. Now? Now, there are 16 Pro Stock cars at every race and that is largely in part to the teams themselves circling the wagons and helping their lower-funded brethren get to events that they otherwise would not make.

Pro Mod has one of those fundamental issues right now and it is kind of an elephant in the room: Sponsorship.

Like the glorious big car-count days of Pro Stock, Pro Mod is largely filled with successful businessmen who love drag racing as a hobby. There is not a lot of motivation out there for guys to hustle sponsor deals. Simply put, they can afford to do it themselves and don’t need the additional work of hustling other people’s money.

There’s a lot of risk there. Why? Basically, one can track the decline in Pro Stock attendance waves with swings in the economy. Guys who have enough scratch to go racing in a Pro Mod on their own dime are smart enough to know when they should no longer do that when business softens. It creates situations where boom and bust periods are directly related to the number of race cars at events.

This is not to say that sponsorships save it all, but at the end of the day, classes with healthy levels of sponsorship have weathered the storms of time in far better fashion than those who have small amounts or none at all.

So, how do we “fix” this from becoming a problem? It has to be a joint effort between the racers and the sanctioning body. More promotion and a better profile with the sanction allows those motivated to sell sponsorship loads more opportunity to actually do it. The road is usually long to putting these types of deals together, but when everyone walks in lockstep it is better for everyone.

Remember how I mentioned above the idea of Pro Mod being more wide open than Pro Stock ever was in terms of people who could actually win on a race-to-race basis? The statement stands as fact but there are certain truths that cannot be denied. One of them is that guys such as Rickie Smith, who do nothing but drag race for a living, as they are supported by sponsors, will always have an advantage over a guy who leaves the office a day early to get to the race and then flies home on Sunday night to pick up where he left off at work. As Scotty Cannon once explained to me, a man who swings a baseball bat seven days a week is going to be a better hitter than the guy who does it once a month.

NHRA Pro Mod is in great shape these days. I’m greedy in the fact that I want these days to go on forever … don’t you?

About the Author: Brian Lohnes is an NHRA National Event Staff Announcer, host of Motor Trend’s Put Up or Shut Up, and co-owner of Bangshift.com.