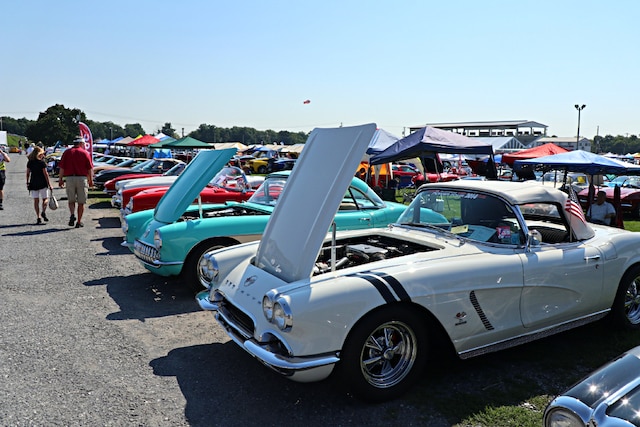 If you have seen one C1 Corvette you haven’t seen them all and that was especially true at the 2018 occurrence of Corvettes at Carlisle held last weekend in Carlisle, Pennsylvania. And there’s a funny thing about C1 Corvettes not everyone agrees on the breakoff point between a C1 and a C2 Corvette.

Some people and we won’t say who they are to protect them from flying rotten tomatoes being flung insist that a C1 Corvette was built from 1953 until 1955 when the 1956-year model was introduced with a completely different exterior that included the addition of coves, hence a C2. And then there’s the folks that believe it’s the rear live axle differential affectionately referred to as a straight axle by avid C1 enthusiasts that defines a C1 with IRS the separating factor.

The fact we here at Vette magazine remember the most about C1 Corvettes is back in the day it wasn’t unusual for a Chevy dealer to custom paint the coves on a C1 in an accent color, and not always in a color the folks at the Corvette plant in St. Louis would have found on a factory color chart. And yet another interesting C1 fact a handful of C1 Corvettes left St. Louis each model year finished only in primer. And yet another fun fact 1953 Corvettes were known to delaminate and it wasn’t until 1954 before black was available, and then only four 1954 Corvettes were painted black… The most famous black 1954 Corvette appeared in the 1955 Mickey Spillane movie, Kiss Me Deadly.