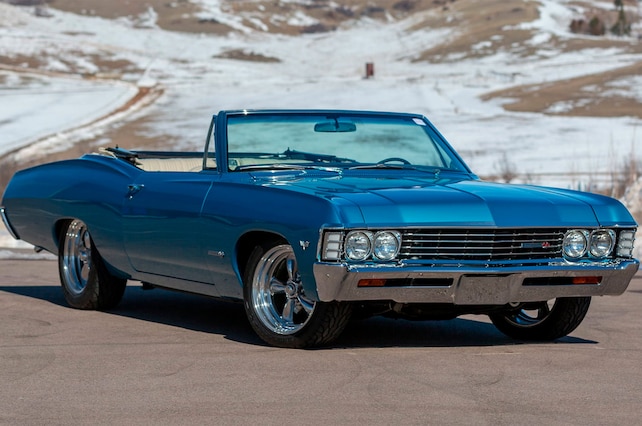 If you’re looking for the deal of the Century here’s a dead sharp 1967 Chevy Impala SS convert that’s crossing the block at No Reserve on Thursday, May 17 at the 2018 Mecum auction in Indianapolis, Indiana. The Impala Super Sport convertible is LOT T34 and we’re calling it a “Super Chevy pick to steal.” Everything that should be done to upgrade a stock 1967 Chevy Impala SS has been performed. You name it, brakes, suspension, engine, transmission has been modernized and it even has air conditioning and power windows.

Under the hood where we imagine originally a carbureted 327 lived has been replaced with a fuel injected Ram Jet 350, and the stock transmission has been upgraded to a 700R4. That means it has a lower first gear to launch faster, and overdrive for cruising at higher speeds while getting better gas mileage.

One of the most popular factory colors in 1967 and still very desirable the exterior is Marina Blue with a mildly customized bright white vinyl interior. A pair of bucket seats flanks a custom fabricated console home to a Lokar shifter, and period correct GM style power window switches

And as we all know car auctions can be a crapshoot, so this stunning ’67 Chevy convert might bring record high results on Thursday May 17 at the Mecum Indy auction or sell for not enough to cover what the paintjob cost.

These blazing fast Impalas, a 1967 Chevy Impala with 396ci big-block and a 1968 Chevy Impala SS with a 427 rat motor, are tearing up the dragstrip. - Super Chevy Magazine

Patience and perseverence prevail over a 10 year period as Thomas Young turns a 1967 Chevrolet Impala into his ultimate streetcar. - Super Chevy Magazine