Many Hot Rodders Learned About Cars in Two-Bay Gas Stations 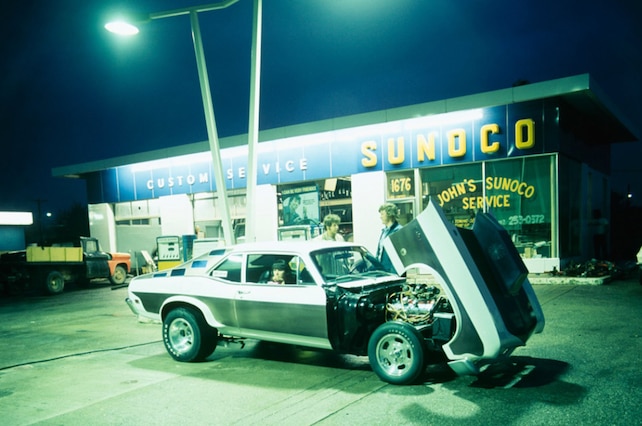 Like lots of kids in their formative years, I had a couple of huge influences in growing my love of cars and making them faster. The first was my dad, who was a racer and hot rodder long before I showed up on the scene, and the second was my job at a gas station while in high school where I worked the pumps and served as assistant, wrench grabber, floor washer, and sacrificial teenager. It was there that I learned so much about what to do, what not to do, and how to get your balls busted into oblivion by mechanics that actually did this stuff for a living and were reliving their own misspent youth through the kids that worked at the station. That place was less a garage and more a classroom. It gave me the best education ever. Thousands and thousands more like me got the same education with varying levels of profanity, secondhand smoke, and frustration. Sadly, these classrooms are a dying breed.

I love gas stations. Those most humble of American institutions are one of the things I pay attention to while on the road. We’re not only losing gas stations ... we’re losing cool gas stations. Places where generations of gearheads spent time learning how to fix stuff and get around a garage or shop. They are being gobbled up by convenience stores where crummy food, crummy coffee, and aisles of crap have replaced lifts, lube racks, rows of cheap tires, and gleaming-red Snap-On toolboxes.

The very station I worked at and screwed around at as a kid has been gutted. That once-great shop is now a store where lottery tickets are now in the very spot where we used to sneak beers in our high school years.

In my time there, about half a dozen guys worked, learned, and went on to make a success of themselves with their hands. Any vestige of the old-school gas station where someone actually took a modicum of care in the condition of your car is gone. Back then we checked oil, filled tires, and used a squeegee or the old man who owned the place would chew our asses. Believe me, there was incredible personal value in that.

But you’re rolling your eyes and taking pity on this old man writing the words because you know that there’s loads of technical schools, training programs, and hand-holding that will take anyone and make them a master mechanic in a few short months. You know, the types of places you pay tens of thousands of dollars in order to have the opportunity to learn, whereas I was paid to be there every day.

While I am not discounting the value of an education, I am telling you that many hot rodders, gearheads, and racers have learned more by doing than by sitting in a classroom. These old gas stations, with their two-bay garages, were the perfect classrooms for a generation of interested kids that lived, ate, breathed, and dreamed about hot cars. Today, they are a place to buy Ho Hos.

How are tomorrow’s rodders getting the proper hands-on education in a semi-professional environment they need? They’re not. Instead, they rely on YouTube videos and forum posts of varying levels of “expertise” to make their buying decisions and influence their mechanical work.

I am not an ace wrench, but if I didn’t have three years of watching Manny Fernandez work his magic at the Shell station, I’d be way lesser for it. Those amazing do-all service station mechanics are a dying breed. The variety of machines they had to diagnose and fix would flummox most guys today. My kids don’t believe my stories of helping with engine swaps and other big jobs at the gas station. In their world, such a thing doesn’t exist.

The last real shame is that the great station garages were the spot where people with cool junk would hang out and bench race late into the night. The classic American gas station has served as a launching platform for so many others like myself. Their departure/absence leaves a big void in the development of the next generation of hot rodders.

Is this something we can fix?

About the Author: Brian Lohnes is an NHRA National Event Staff Announcer, host of Motor Trend’s Put Up or Shut Up, and co-owner of Bangshift.com.

Church Boys Racing teams up with TMI interiors to build a modern Nova that can handle, perform, and cruise in style.

Chris Holstrom reflects on how he got started in the muscle car world and the fact that street racing sent him to the poor house.

» Read More
This track-only 1966 Nova was revamped into a street monster!

Most people build their street cars into race cars. Rick Plush took the opposite route with his blown, big-block ’66 Nova, and the result is stunning.

This 1972 Chevy Nova restomod dials back on the super-high-end show-and-go parts for a more sedate muscle car driving experience.

A father and son team turned this worn-out 1967 Nova into a big-block–powered street brawler.