Firing Up: Just one more 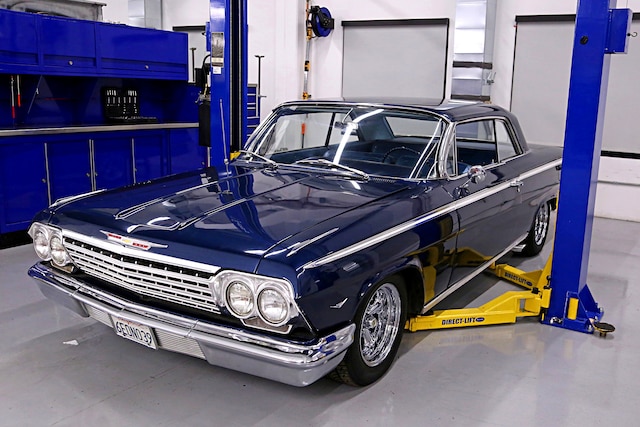 As car guys, we’re pretty much gluttons for punishment when someone dangles a good car buy in front of us. The inability to “just say no” when it comes to purchasing another attractive piece of vintage Detroit steel is a weakness that’s just about impossible to overcome. It’s our kryptonite—more like “crack”—for those with an addictive personality, or who are in denial. Sound familiar? Thought so.

Although I don’t have any mentally or physically damaging long-term addictions, unless coffee is considered destructive, having a low amount of willpower for picking up a new project now and again is my only vice. But compared to a lot of the guys I hang with in our little muscle car world, my hot rod addiction is fairly tame, although my wife may question that statement, as well as my sanity.

My past projects have mostly consisted of Camaros: a ’67 RS was my first, then came a ’71 (which I still have), and an ’01 Z28 we called Black Betty (man, I miss that car). I went through a G-body phase for a while, which started with an ’82 El Camino that I sold to make way for an ’82 Malibu wagon. Those cars respond well to some bolt-on suspension upgrades, but, unfortunately, living in California makes engine performance upgrades a difficult proposition.

Now, I’ve always admired 1962-’65 Chevys from afar, but figured finding one in decent condition within my price range was heading into “Unicorn territory.” Never say never, I suppose. As luck would have it, a ’62 Impala hardtop suddenly became available. Actually, it wasn’t really for sale but when I asked the owner if he’d like to part ways with it he was open to discussion. We charmed each other with a number of back and forth witty emails. Mine explaining how cash-challenged I am, in hopes of getting him down in price, while his emails reiterated how much he had “in” the car. My promises of a good home for the car and continued claims of possessing a very thin wallet finally got him to come down to a real-world price. We conducted a firm “digital handshake” followed by me scratching out a check a bit larger than my wife knows. (Ed. Note – She never reads my editorials so I’m good talking about this here.)

So now comes the part where we decide what to do with Chevy High Performance’s latest project car.

It has a very cool old-school vibe going already, with 15-inch Radir wheels, which I like, but the drum brakes and tired small-block gotta go. We are leaning toward keeping the build somewhat simple, but we know how that plan tends to go out the window. I think for a car like this the idea is to do basic bolt-on suspension upgrades, disc brake conversion, and being that we have an LS1 just gathering dust in the TEN-Discovery tech center, we’ll go ahead and throw that in. Word around here is that it’s got some pretty good parts and makes somewhere around 400 hp. We’ll worry about who it belongs to later on. Maybe that person doesn’t even work here anymore. I suppose we’ll find out soon enough, though.

It’s been a few years since we’ve introduced a new project so we are kind of excited to start cracking this thing open. And being we have no plans to dive into a frame-off restoration or anything crazy like that, the upgrades on this project will happen fairly quickly.

Wish us luck with our new project and feel free to throw some build ideas our way. We are easily influenced, which might explain how we ended up with the car in the first place.

We are looking forward to digging into our ’62 Chevy project and dialing it in with some cool suspension and performance upgrades.

A 1962 Chevy Bel Air Bubbletop Taken to the Next Level

When your dream car gets stolen then a popular rap song renders a replacement out of financial reach, do what Alec Kiln did and build something even better. This all-aluminum 409-powered 1962 Chevy Bel Air bubbletop is a piece of American muscle worth settling for.

Billy Morgan wanted a 1962 Chevy Impala that stood apart from its brethren, and we'd say he achieved his goal. Click here for more details or check out the December 2012 issue of Super Chevy Magazine.

Check out this 1962 Chevrolet Impala that has a 1972 Chevy 350 that has a Turbo 350 transmission. Read more only at www.chevyhiperformance.com, the official website for Chevy High Performance Magazine!

Check out this 1962 Chevrolet Impala that 509ci engine, Lunati crankshaft, PSI valvesprings, and more. Check it out only at www.chevyhiperformance.com, the official website for Chevy High Performance Magazine!

Jack Bracketts obsession turned to reality when he finally got his 1962 Chevy Impala, and began by planing the rebuild for the first two years before taking another five years to complete. - Super Chevy Magazine

Doug Marion reflects on his 1962 Chevy Impala SS that he definitely had fun with back then. It was eqipuped with a 409 W-series Turbo Thrust V8 engine, Fenderwell headers, Z11 cam and ram-air, slicks, Glasspack exhaust. - Super Chevy Magazine