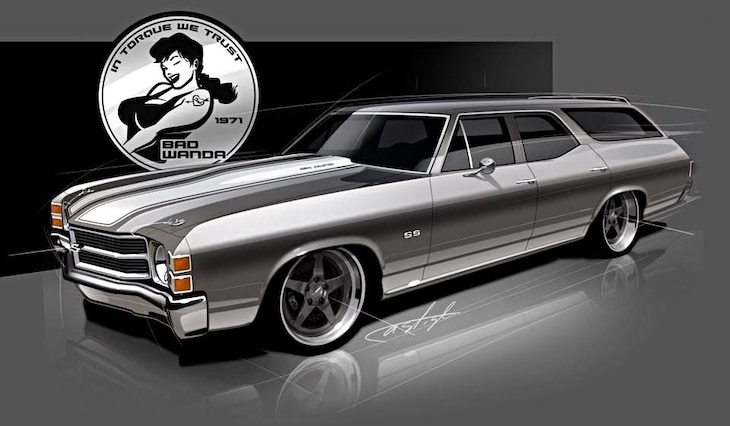 Let’s be honest here, building a Camaro that will stand out in the crowd isn’t easy to do these days. I mean seriously, in an ocean of amazing Camaros what hasn’t been done already? This is as true on the racetrack as it is at the car show. Build a badass Pro Touring Camaro, hit the track and if you’re not in the top five, you’ll feel like you failed somewhere. The issue isn’t even you, it’s just that the field is thick with uber fast, big-money rides clawing for a podium spot. Car shows are even tougher where high six-figure builds rule the roost and get most of the love.

So, what do you do if you want to garner a bit more attention and not be subject to the pressures of finishing in the top five? The answer is to build something way out of left field; something unexpected. I came to this realization driving my LS-powered ’71 Malibu (pretending to be a Chevelle) wagon to cruises and driving events. First off, it gets a ton of positive attention since, well, you don’t see many four-door station wagons at driving events. The best part is that I could just have fun driving with zero expectations of winning anything. Hell, if I made the top 10 I was hero because, after all, it’s a damn station wagon! At a recent autocross, full of imports, it was one of the faster cars there and the reactions were priceless. At cruises, people would see the LS engine, six-speed Magnum, Recaro seats, and Forgeline wheels, parts typically associated with Chevrolet’s sexier models and just love that a wagon, something many of them were hauled around in as kids, was getting the track-ready treatment. Best off all, when not at the track it was still perfect for taking the kids to school and making lumber runs to Home Depot.

The biggest downside to tracking the wagon is weight. At just over 4,000 pounds (sans driver) it’s a beast, so I’ve decided to give the wagon a performance makeover. Shafiroff Racing is massaging together a 415 stroker LS3 long-block and so I will be mating it to a ProChager D-1SC supercharger. A combo I hope is worth 1,000 hp on race gas and 800 on the garbage that passes for pump gas in California. To handle the extra power, and help out in the handling department we will also be sliding a Roadster Shop Fast Track chassis under the project. We code named the project Bad Wanda, and I have a few tricks to make the two-ton four-door more capable on the track and still fun to cruise around town. Maybe I will even get closer to a top five finish on the track. Either way, it’s a win/win proposition and it will certainly never get lost in the crowd.