Firing Up: I thought I’d seen it all, then along came the 2017 SEMA Show 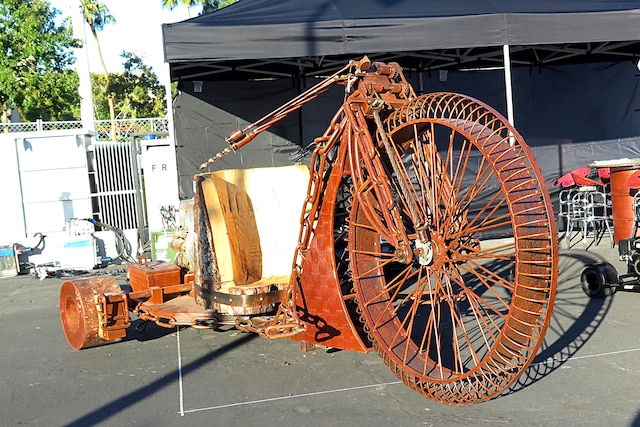 October 31 is the day most people recognize as Halloween—the night we take our kids out trick-or-treating. But to us aftermarket industry peeps and car folk, milling through our kids’ stash looking for the Super Size Kit Kat had to wait. You see, this year October 31 was the kick-off for the largest automotive show of the year: SEMA (Specialty Equipment Market Association). Although not open to the public, $40 and a show of proof that you work in the automotive industry will get you in. Apparently, the automotive industry is growing at an insane pace, as the 2017 show proved it actually was possible to get more people through the doors than in 2016.

I’m amazed at how many automotive companies from all over the world make their way to the Las Vegas Convention Center, throw out a card table, a couple fold-out chairs, prop up their latest and greatest automotive-related parts, and “hold court” in a 10x10 booth space to thousands of potential buyers. And that’s nothing compared to the massive displays brought out by the larger automotive companies. It’s hard to believe some of those elaborate exhibits are up for only five days. Most of these companies have been doing the SEMA drill for years; we’re talking seasoned show veterans that have this down to a science.

The aisles are packed with thousands of rubbernecking auto buffs looking to scope out the coolest new products, catch a selfie with their favorite Discovery/Velocity Channel or YouTube celeb, and drool over the countless super-high-end cars being unveiled by the best sheetmetal craftsmen, fabricators, and painters in the world. Each and every one an indicator that the automotive aftermarket is stronger than ever—and that’s a good thing.

Builders and car owners realize they are up against insane competition and must do whatever it takes to make their build stand out from the rest. At SEMA you gotta one-up everyone you can, and it ain’t easy. One example was the Toyota Prius we came across in the American Racing Headers’ booth that had a full tube chassis, a 6.2L Hellcat engine yanked out of a Charger or Challenger, and a TREMEC Magnum six-speed transmission. The 4.5L Whipple perched on top of the engine was icing on the cake.

Hopefully someone will try to one-up the Prius at the 2018 SEMA Show and bring out a supercharged, LS7-powered Volt for us Chevy fans. Sounds ridiculous and self-serving, but I’m betting not many thought the HEMI-powered Prius was a good idea at first, either—and probably still don’t. No doubt quite a few adult beverages were consumed when that idea was conceived.

That’s SEMA. It’s not necessarily about being practical, but doing something that no one else has.

So, if someone decides to put a blown Coyote in a Ford C-Max, I’d like to see that, too.

This giant, creatively built trike looks like a collaboration between Mad Max and Fred Flintstone.

This hammered, LS-powered late-’60’s C30 Chevy pickup complete with fully functioning camper got all kinds of attention out front of the convention center.

A stressed copper-wrapped 4x4 fifth-gen Camaro? Yep, you’ll see it all at SEMA.