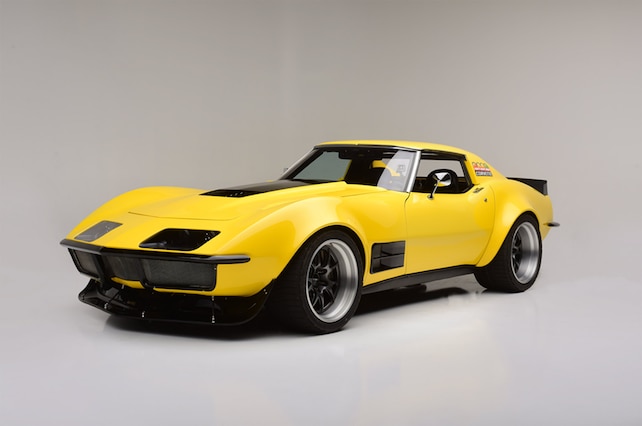 Better be quick on the bid if you want to own a piece of Corvette history because The 48-Hour Corvette is set to cross the block as lot #1292 at Barrett-Jackson’s 2018 Scottsdale auction held January 13-21.

Most classic racing Corvettes are revered for victories earned during the ‘50s, ‘60s and early ‘70s. Cars like the Stars and Stripes L88, Purple People Eater ’59 and Mickey Thompson Z06 Split Windows have secured their place in racing and collector car history. The cars are valuable, in part, because their history cannot be duplicated. Somewhere on the other end of the collector car spectrum lives the Restomod Corvette.

While Restomods can, indeed, be duplicated, no two are the same. Likewise, some examples are more special than others. The most desirable Restomod Corvettes typically sport ultra-high- performance hardware such as oversized disc brakes, fuel-injected LS-based engines and updated tubular suspension. Topline examples usually feature modern creature comforts such as bolstered seating, Bluetooth audio and modern air conditioning. It’s no wonder that Restomods are so popular.

Lot 1292, a 1972 Corvette coupe known as the “48 Hour Corvette,” is definitely an ultra-high performance Restomod. Its modern architecture includes a Lingenfelter Performance Engineering LS7 engine that generates a dyno-verified 649 horsepower. Electronic traction control helps to transfers that power to the ground, while massive 14” Wilwood disc brakes easily bring the car to a halt. The RideTech suspension provides modern, supercar-like handling. Hand-fabricated spoilers and vents manage airflow in and around the car’s curvaceous C3 bodywork.

The 48 Hour Corvette is plenty modern, for sure. It has one noteworthy feature, electronic shock absorbers, to really drive that point home. While active suspension is standard equipment on many of today’s performance cars, the hot rod industry has only recently learned how to adapt the technology to older classics. Called Instinct, the system dynamically varies suspension firmness in real time. According to the consignor, “It’s like riding on velvet and racing on Velcro. During high speed cornering, you can sometimes feel the system adapting to changing cornering loads.”

Like those famous vintage racecars, this 1972 Corvette has provenance. However, its history isn’t from the 1970s. In March of 2015, a team of manufacturers joined forces to build the car in a 48-hour time frame – hence the nickname “48 Hour Corvette.” The project unfolded in front of thousands of Internet livestream viewers and is documented in a multi-part YouTube Video Series on the web. The high visibility project showcased the many exceptional speed parts available for these cars.

The 48 Hour Corvette went on to compete in numerous street car performance driving events including the Goodguys Rod & Custom Autocross Series and Optima’s Search for the Ultimate Street Car Series. The consignor continuously refined the Corvette over the years including the addition of fender flares and wide tires as well as the aforementioned electronic shock absorber system. The refinements continued until this year, 2017, when the 48 Hour Corvette made history by winning the Goodguys Autocross Points Championship along with event-wins in the Optima Series and Motor State Challenge events.

Be it a historically significant original or a high-tech Restomod, it’s a great time to buy a classic Corvette. Barrett-Jackson always presents a wide variety, of course. As the Restomod scene evolves, it’s interesting to see examples, such as lot 1292, the 48 Hour Corvette, cross the block with history of its own.