COPO Crate Engine Lineup: The 2017 COPO Camaro Gets a Boost in Power 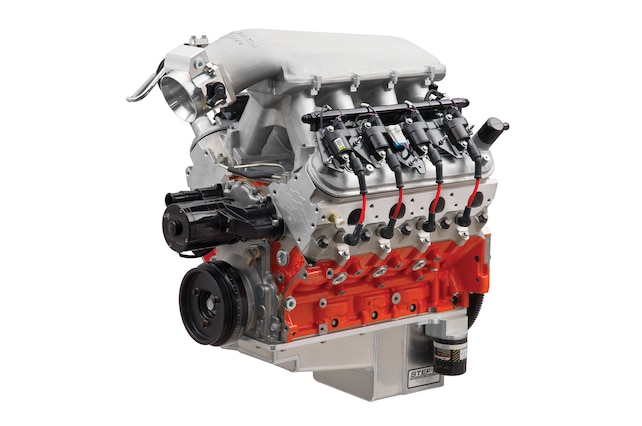 It’s been almost fifty years since the first COPO Camaros armed with 427ci engines were unleashed. Those powerful performance engines could be special ordered in 1969 Camaros by enterprising Chevrolet dealers via a Central Office Purchase Order (COPO), bypassing the Regular Production Option sheet. COPO numbers were 9561 and 9560. These cars had an edge at the drag strip, and today that same spirit drives the late-model COPO Camaros.

Heading into its sixth year, the program has spawned several high-performance engines offered in the production race car and made available to other racers through Chevrolet Performance. Included are the COPO LT production-based crate engine and the enhanced COPO 427, which uses the LSX cylinder block for maximum strength.

The COPO LT (P/N 19351766) is a high-power blend of the latest technologies and proven horsepower-building elements. It builds on the strength of the LT1 6.2L engine found in the production Corvette Stingray and Camaro SS, and adds a hotter camshaft, an all-forged rotating assembly, CNC-ported heads and a Holley Hi-Ram intake manifold, similar to the one on the COPO 427.

The COPO 427’s enhancements are rooted in the sturdy, iron LSX block, which replaces the previous regular-production block. It also carries a new part number: 19351762. What hasn’t changed is a tough, all-forged and high-compression rotating assembly, high-flow LSX-LS7 heads, and a Holley Hi-Ram intake manifold for high-rpm power.

No matter which engine you choose for your race car, you’ve got history on your side!

This time around it’s a pair of badass Camaros separated by 50 years of technology and innovation: a 1967 RS big-block and a 2017 ZL1 with a blown LT4!