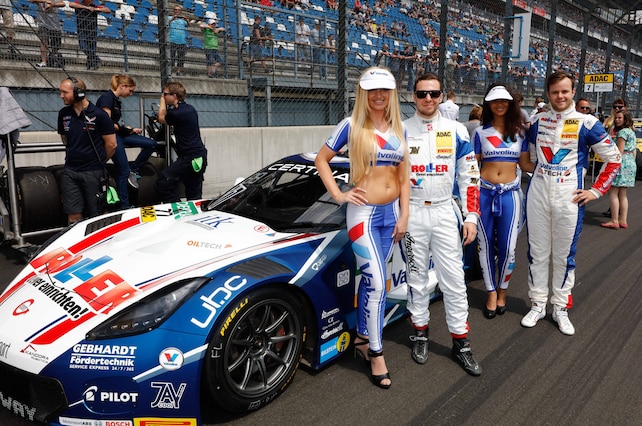 Callaway Competition’s C7.R GT3 Corvettes dominated at ADAC GT Masters race weekend in Lausitzring, Germany. The team finished 3rd and 4th on Saturday and 1st, 2nd and 10th on Sunday! This winning performance catapulted drivers Daniel Keilwitz and Jules Gounon to within three points of driver’s championship lead. Lausitzring was the third of seven weekend meetings for the competitive German Championship. Each round includes two one hour sprints with a mandatory 65 second pit stop for a driver change. At the previous ADAC GT Masters race weekend at Sachsenring Daniel Keilwitz and Jules Gounon won race two. This was the team’s first victory with the new Corvette GT3 racer. They were given a 30 kilo (66 lbs.) weight increase because of that victory. They carried this weight penalty into the first Lausitzring race. Thirty three cars qualified for race one. A Porsche captured the pole with a time of 1:22.108. Just a tick behind with a 1:22.373 was the #69 AutoArena.de Corvette driven my Patrick Assenheimer. Qualifying eighth at 1:22.690 was the #77 Valvoline/Roller Corvette driven by Jules Gounon. The # 31 Whelen Corvette driven by Boris Said and Loris Hezemans did not qualify due to a power steering failure. Last on the grid with a time of 1:33.843 driving the No. 13 RWT C6 Callaway Z06.R GT3 was Remo Lips. Lips is leading in the Trophy (Amateur) championship category. This is the only previous generation Corvette GT3 racecar competing in the ADAC GT Masters.

When the first race went green Assenheimer’s Corvette was second and Gounon moved his Corvette from eighth to fifth. The Porsche extended his lead, but the battle for second was furious. When the nine minute pit stop window was completed the #69 Corvette lost second place due to a slow pit stop and rejoined in third position. Keilwitz gained a position and rejoined in fourth. When the checkered flag fell the #69 Auto Arena Corvette was third behind a Lamborghini and the Porsche. The #77 Valvoline/Roller Corvette was fourth and its drivers moved up in the championship standings. The #77 also was able to have its 30 kilo weight penalty removed, because of its fourth place finish. The No 13 RWT Corvette finished 21st and second in the Trophy class. The #31 Whelen Corvette finished 25th.

Race two qualifying saw the #69 AutoArena.de Corvette driven by Dominik Schwager capture pole position with a 1:21.613. The No. 77 Corvette driven by Daniel Keilwitz was third with a 1:21.878. When the race went green five cars all tried to squeeze into turn one exiting the wide Auto Arena main straightaway. It was chaos with cars bumping and hitting each other and carbon fiber parts flying everywhere. In spite of bedlam the two Corvettes managed to came out in first and second position. Quite a few competitors exited turn one with some kind of body damage. However, the AutoArena.de Vette was able to maintain the lead, while the Valvoline/Roller Vette looked for a way to pass. Schwager did a superb job keeping Keilwitz behind until the pit stops. The 21 year old Jules Gounon shot out of the pits in the #77 and took the lead and went on to finish 2.63 seconds ahead of the #69 Assenheimer Corvette. The #31 Whelen Corvette finished a credible tenth and drivers Boris Said and Loris Hezemans were pleased with capturing a championship point. Unfortunately the #13 RWT Corvette experienced a mechanical issue and did not finish. It was a carnage filled race with parts flying off very expensive sports cars, but the two Corvettes finished without a hint of damage. It was a superb performance.

After the race winner Daniel Keilwitz said, “Clearly, we’re very happy with this victory. The start went well for me. On the run-in to the first corner, I briefly got ahead of the leading Callaway Corvette, but I drifted wide of the racing line and lost traction on the grass. When the pit stop window opened, I stayed out one lap longer than Schwager went as fast as I could. That was the decisive factor that helped Jules take the victory.” Race winner Jules Gounon said, “As a rookie, I am not looking at the championship, just focusing on each race. I am getting accustomed to this new Corvette with each outing. My thanks to the team who, as always, does such a great job.” It would sure be nice to see this amazing Corvette compete in the Pirelli World Challenge. Maybe next year?