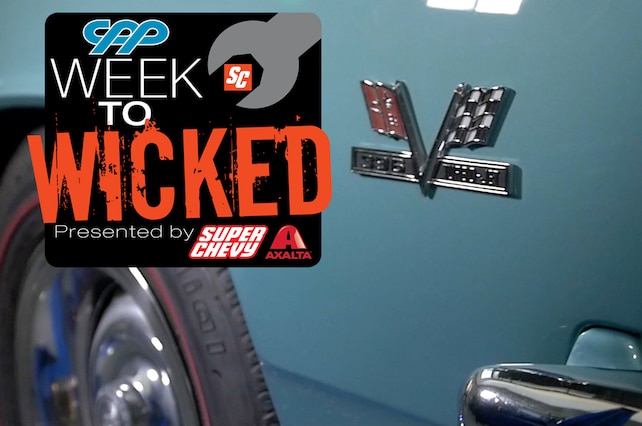 How long did your last project build take? Months? Years? Decades? Well, the die-hard gearheads over at Super Chevy are attempting to accomplish that feat in only one week’s time. We’re calling this epic weeklong thrash CPP Week to Wicked and it’s presented by Super Chevy and Axalta Coating Systems.

It all begins the morning of April 18 when our stock 1967 Chevelle will roll into Super Chevy’s Santa Ana Tech Center for a full teardown and rebuild. We’ll be pulling the car down to its bones, replacing steering, suspension, powertrain, drivetrain, and just about everything else you can possibly imagine; all with the goal of bringing the performance of a 1967 Chevelle up to par with modern muscle cars. It’ll be a mad rush till the very last seconds of our timeline. And if that wasn’t enough, immediately following the build, we’ll be driving the car on a 1,000-plus-mile road trip to prove its road readiness. We’ll be hitting the dragstrip, the engine dyno, and a few local cruise-ins (to be announced at a later date).

How can you follow along from home? The entire event will be covered on superchevy.com via daily video and story updates, as well as on all of our social media sites such as Facebook, Twitter, and Instagram. Stay tuned for what is sure to be one heckuva ride!

The Car
The build begins with the saga of our AMD 1967 Chevelle, a tale many Super Chevy readers are already quite familiar with. The car, which started out as a rusted hulk, was refurbished from the ground up by the talented crew at Auto Metal Direct (AMD), and returned to the stock specs for a big-block 396 SS car. It then made a cross-country trek from Florida to Super Chevy’s new SoCal headquarters a few years ago, where it has since been cruised all over the Golden State.

Steering, Suspension, and Brakes
The A-body’s factory four-link may have been trick stuff in the ’60s but by modern handling standards our Chevelle is a little bit of a slouch. Classic Performance Products (CPP) came to the rescue with a killer list of steering, suspension, and brake components to get this cantankerous old Chevelle to handle with the best of them. Energy Suspension has stepped up to provide a set of polyurethane bushings to stiffen up the car for track use, and Viking Performance will handle suspension movements at all four corners with a set of their double-adjustable shocks. Rolling stock will be taken care of by American Legend wheels, because when you’re hunting for lateral g’s, 15-inch steelies and bias-ply tires just won’t cut it.

Engine and Driveline
While we’re as big of big-block fans as any, truly modernizing the powertrain in any Chevy muscle car means turning to LS power. To that end, the crew at BluePrint Engines is contributing the LS equivalent of an atomic bomb. Their 427ci LS3-based stroker utilizes a cylinder head of their own design and cranks out an awesome 625 horsepower and 565 lb-ft of torque. Funneling all that go to the rear tires will be one of Performance Automatic’s ultra-stout Platinum Series 4L80E transmissions. The unit is packed full of upgraded internals and, with the new LS engine, should be a plug-and-play install into the car. Keeping both the engine and transmission cool with all that power is a direct-fit aluminum radiator and transmission cooler, with electric fans, from Flex-a-lite. On the front of the engine will be an Eddie Motorsports front drive system—the days of changing broken V-belts on this Chevelle are finally over! Lastly, since a big engine’s gotta eat, Tanks, Inc. is building an EFI-compatible steel fuel tank just for the project.

Electrical and Interior
Adding modern electrical components such as an engine controller, transmission controller, electric fans, etc., can heavily tax a stock electric system. With all the modern tech going into the Chevelle, we weren’t ready to chance it and called up Painless Performance for one of their complete harnesses. Attaching to that fresh copper is a Dakota Digital Direct-Fit gauge set ready to monitor the car’s newfound vitality. While we will retain the majority of the car’s interior for the nostalgic feel that makes driving a muscle car what it is, the stock bucket seats aren’t up to the task of keeping our magazine-guy butts planted firmly during hard cornering. We’ll be swapping in a set of PROCAR by SCAT buckets to prep the car for autocross events.

Stay tuned as we prep for what will without a doubt be one of the most intense and exciting real-time builds of Super Chevy’s long history.

More on this Chevelle's previous life: