Week to Wicked, in Wheel Time: Picking the Perfect Wheel for Fitment and Style 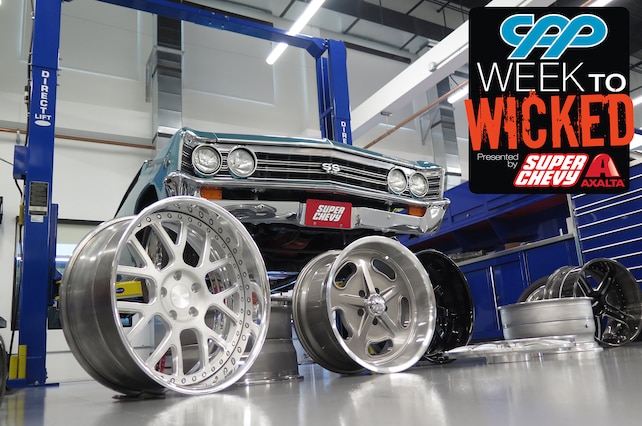 Does that pretty little Emerald Turquoise 1967 SS396 Chevelle with the black vinyl top look familiar? Of course it does, it’s Super Chevy’s AMD Chevelle; and man is the crew at Super Chevy truly in for some high-compression fun! That’s high compression as in the pressure is really on to transform this 1967 SS396 from a stunning restored car into a badass Pro Tourer in just one week’s time. And we’re not speaking of time as in a reality TV show, where the fourth dimension of time and space gets distorted, we’re talking an honest to gosh, one-week-long hash ‘n thrash followed immediately with an insane reliability run/road trip of biblical proportions.

It all begins the morning of April 18 when our stock 1967 Chevelle, which was re-bodied by Auto Metal Direct (AMD), will roll into Super Chevy’s Santa Ana Tech Center for a full teardown and rebuild. We’ll be pulling the car down to its bones, replacing steering, suspension, powertrain, drivetrain, and just about everything else you can possibly imagine; all with the goal of bringing the performance of a 1967 Chevelle up to par with modern muscle cars. It’ll be a mad rush till the very last seconds of our timeline. And if that wasn’t enough, immediately following the build, we’ll be driving the car on a 1,000-plus-mile road trip to prove its road readiness. We’ll be hitting the dragstrip, the engine dyno, and a few local cruise-ins to be announced at a later date.”

How can you follow along from home? The entire event will be covered on superchevy.com via daily video and story updates, as well as on all of our social media sites such as Facebook, Twitter, and Instagram. Stay tuned for what is sure to be one hell of a ride.

Interested in the car’s backstory? Check out the original AMD Chevelle build below: