Got $40-Grand to Join the A-Team? Buy this A-Team Tribute Van 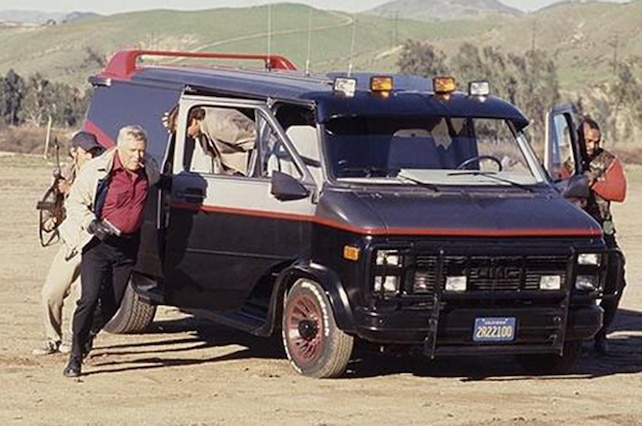 Who would have ever thought a person could find a near faithful replica of the A-Team’s van for sale on Las Vegas’ Craigslist and purchase it for a Barrett-Jackson Scottsdale price?

The big difference between the real A-team van and the A-Team replica van for sale on the Las Vegas edition of Craigslist is the wheelbase. Take a close look at the film clip of the real A-Team van with Mr. T driving and the rest of the team bailing out and you’ll notice it’s a G10 short wheelbase ½-ton van. Other differences include the real A-Team van sits at a rake with narrower tires, and the Vegas tribute edition sits flat with wider tires.

The A-Team tribute van for sale in Las Vegas is based on a 1981 Chevy G20 long wheelbase ¾-ton van, but other than the minor differences described above it appears to be pretty close.

Here’s how the seller describes his efforts.

“1981 Chevy G20 Beauville Van 350 Engine, No Rust, No Damage. This van started as a fleet Arizona vehicle that was fleet maintained until early 2014. This van is impossible to find in any condition but to have no rust; low mileage, no damage and fleet maintained van you have the basis for a great build. This van was purchased for a price of $2,500 with an additional $1,000 spent on new hoses, belts, full tune up, fluids, brakes, suspension components and transmission flush. Full records on the purchase and the engine work will also be included in the paperwork. 1) Fiberglass components (fender flares, running boards, lower front spoiler, rear upper spoiler, and sun visor) These items were professionally installed by a custom TV vehicle builder who is well known in the industry. The parts used are of high quality and no "off the shelf" components were used.

1. Fiberglass components (fender flares, running boards, lower front spoiler, rear upper spoiler, and sunvisor) these items were professionally installed by a Custom TV vehicle builder who is well known in the industry. The parts used are of high quality with no off-the-shelf components used.

2. Front Brushguard - This piece was custom made and created from the TV specs from the show.

3. Fog lights on Brushguard / lower spoiler / sunvisor - These are also of TV spec and correct colors from the show.

4. 3-color paint (satin black, gunmetal grey, red) with 2 color pinstripe - This paint job is the correct TV spec with a Black Matte finish as the show did not have a glossy finish van.

5. Exhaust tips exiting in front of rear wheels - 4 port square tip- These were custom made and also match the TV show van. They also include a cherry bomb sound and will create a backfire and flame when revved quickly

6. Extended sliding door hinge (needed to clear fender flares) This bracket is custom made and not something that you can purchase.

7. 3 roof antennas (1 wired for CB, 1 wired to stereo, 1 blank) These were also from the TV show and always left off of most replicas.

8. Turbine/Cyclone Rims and Tires including correct paint. These rims are very rare to find the offset 15 x 8. If you can find them the tires alone are $500 each plus shipping.

Here are the interior components:

9. Interior - Fully custom front chairs, swivel and moving captains chairs and rear bench. These seats are TV correct color along with correct textured seats. These were sent out to a custom interior company, which took 8 weeks to complete.

10. Full floor and walls custom built inside of the van to provide a sub floor for comfort of the rear passengers. This alone was a 6-week process. The floor was covered with carpeting as well as the walls and the headliner is made of velour.

11. New weather stripping was installed for all of the doors and windows.

12. Overhead console across front was custom built to hold the working CB radio.

13. The dashboard, side door panels, rear door panels, engine cover and side mirrors were all professionally painted to correct TV spec.

The van is currently used for corporate event rentals and trade shows and can also include a website for rentals if that is the direction that you would like to go with your purchase.

In total this van took over 10 months to create and full photos of the build, build sheet, video and all documents will be provided with the new owner. This is truly a one of kind A Team van with no other vans on the Internet like the one that we have. Every detail has been added to this vehicle to come as exact as possible to the original from the TV show.”

It’s interesting to note actor Mike Meyers, a fan of ‘80s TV star cars, commissioned a more accurate rendition of the A-Team van using a 1983 Chevy G10 cargo van and offered it for sale in 2012 for $20,000. If one does a quick Google search on A-Team tribute vans they’ll discover the A-Team van might be the most reproduced TV star car of all time.