For 2017, the Sixth-Gen Camaro Will be Faster than ever! 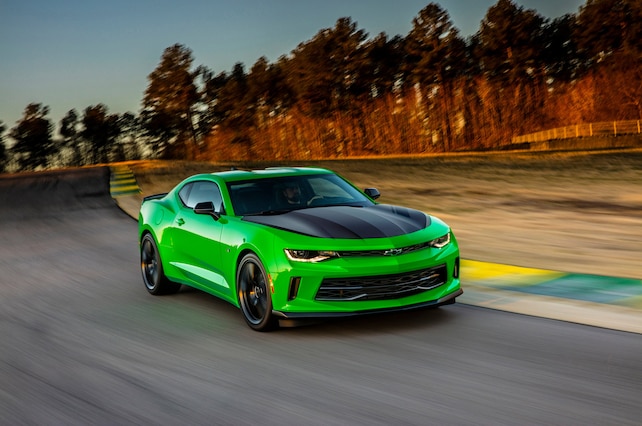 For the 5th generation Camaro, GM had the rather brilliant idea to bring back the 1LE “track pack” to help bridge the handling gap between their SS models and the higher end Camaros such as the ZL1 and Z/28. This meant guys that wanted to blow Mustangs and Challengers off the track could do so for a lot less coin. The 1LE package was developed back in 1988 to make the Camaro more competitive in Showroom Stock road racing and started be offered in production Camaros starting in 1989. It was a rare option and we’re glad that Chevrolet reintroduced it after discontinuing the package in 1999.

Well, it was such a hit on the fifth-gen that GM has decided to offer a 1LE package on the new sixth-generation Camaro as well! Yep, for 2017 the 1LE is back, with a twist. Not only can you put this handling package on your SS, but it will also be available on 1LT and 2LT coupes with the 3.6L V6! That means even more gearheads will have an affordable way to get their Camaro ready for the track or their favorite curvy highway. Featuring more aggressive suspension tuning, Goodyear Eagle F1 tires, and Brembo brakes, the LT 1LE will be able to nail down an impressive 0.97g cornering grip! Other options, such as Recaro seats and a Performance Data Recorder, will make the package even better.

For the SS models the 1LE package will include magnetic ride control, with new FE4 suspension tuning and a new, segment-exclusive, electronic limited-slip differential (eLSD). Paired with massive Goodyear Eagle F1 tires, lateral acceleration will exceed 1G. Additional features available on the 1LE package include standard Recaro seats and a Performance Data Recorder (PDR), new to the Camaro lineup. As a result, the 1LE package elevates the award-winning performance that earned Camaro the 2016 Motor Trend Car of the Year.

The new 1LE packages are available in late 2016, on 2017 Camaro SS and LT V-6 coupes equipped with manual transmissions. Pricing and performance data will be announced at a later date.

The Camaro LT 1LE was developed to be the most track-capable sports coupe in its price class. Highlights include:

“With a curb weight under 3,500 pounds, excellent front-to-rear weight balance and the precision of the FE3 suspension, the Camaro LT 1LE offers unmatched capability in its class,” said Oppenheiser. “As a result, it offers incredible performance for Camaro V-6 customers.”

The 2017 Camaro SS 1LE introduces the new FE4 suspension to the Gen Six Camaro – a performance-oriented chassis system with specific tuning for the Magnetic Ride dampers, springs and stabilizer bars. Additional highlights include: