A Quick Look at the Corvette’s 7-Speed, Triple Overdrive Transmission 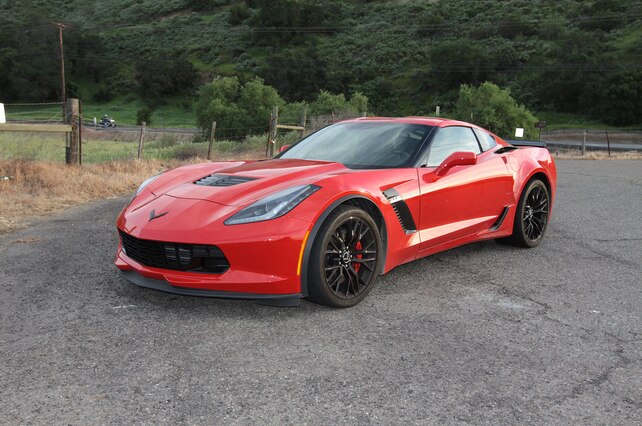 Who knows what Chevrolet was thinking in 1953 when they introduced its new Corvette with the only transmission available being a cast iron 2-speed automatic famous for sluggish shifts? If equipped with the same 3-speed manual transmission found standard in 1953 passenger cars and pickups, the early Corvette, with its factory hopped-up 235-inch Blue Flame 6, could have been a peppy performer. With the exception of 70 V-8 powered 1955 Corvettes produced late in the year, the Corvette finally became available with a stick shift transmission in 1956. Sixty years later the Corvette continues to offer a choice between an automatic or manual transmission with the manual as standard equipment. Either option is a good choice; it just boils down to personal preferences.

For the C7, the standard Corvette transmission is a Tremec TR-6070 7-speed manual transmission. This transmission includes Active Rev Matching, a feature that matches engine and vehicle speed for smooth, quick and precise down shifts – like those performed in track racing. The Vette’s software recognizes when the car is decelerating and “blips” the throttle, matching input (engine speed) with output speed (wheel speed) when downshifting to lower gears. Rev Matching replaces the heel-toe driving technique, making a perfect shift every time. This feature can be toggled on and off using the steering wheel paddles.

Tremec achieved a significant milestone in creating a high-torque 7-speed transmission that is packaged in a similar space as the TR-6060 6-speed manual transmission found in earlier generation Corvettes. The TR-6070 has several ratio options that are based on GM Regular Production Option (RPO) codes for vehicle orders by the dealer from the factory (just like its predecessors). For example, the standard Corvette has a 2.66 First, 1.78 Second, and 1.20 Third gear. Meanwhile, the Z51 package uses a 2.97 First, 2.07 Second and 1.43 Third gear to improve its 0-60 times. And in case you are wondering, the supercharged Z06 needs less gear to maintain traction with its monsterous 650 lb-ft of torque, so it has a 2.29 First, 1.61 Second and 1.21 Third. Fourth gear is 1:1 in all versions, but Fifth through Seventh vary as well. Interestingly, all have the same 3.42 Final drive ratio (rearend gears).

The TR-6070 synchronizers are one of the unique design features of the transmission, which include a combination of double-cone and triple-cone rings, utilizing a hybrid solution on all forward gears. The hybrid rings are a combination of carbon and sintered bronze cones – providing higher capacity and shift performance. Linear bearings lower the friction of the shift rail movements, making the shifter feel naturally lighter and more direct.

The C7 Corvette has a drive-mode selector with five general settings – Weather, Economy, Touring Sport, and Track – all of which can be further tuned to the driver’s wants. The vehicle uses an advanced clutch set with a dual-mass flywheel to further isolate engine-firing pulses and reduce gear rattle – a source of noise, vibration and harshness (NVH) issues.

Other new developments in the TR-6070 include a speed sensor in the rear of the transmission, a new front transmission plate and extension housing, and an internal cooling pump to maximize performance. Beaded gaskets are used to improve sealing between the case castings.

The seventh-generation Corvette establishes the benchmark for modern performance cars by using advanced technologies to deliver more miles per gallon and reduce emissions. The 7-speed, triple overdrive transmission helps boost the vehicles highway fuel economy to 29 MPG, and 17 MPG in the city.