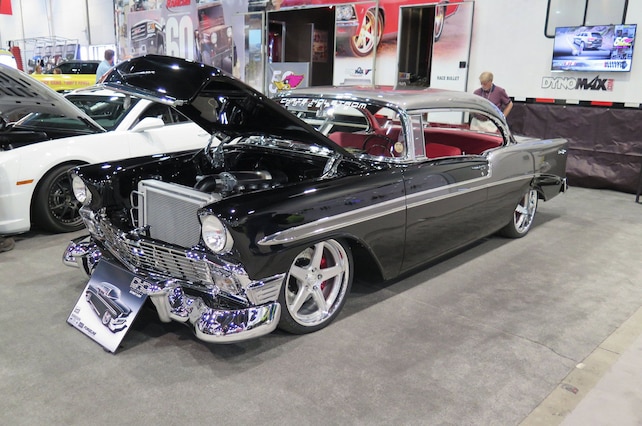 Who would have ever thought the spark that ignited a full-blown SEMA build started with Art Morrison terrorizing a potential customer with the demo-ride from Hell?

We ran across this super sanitary 1956 Chevy Bel Air 2-door hardtop on the trail to see what builders from across the nation were finishing up for SEMA 2015. Checking in with the Northwest, or more specifically Puyallup, Washington, we caught up with Chris at Chris Holstrom Concepts and began discussing the pro-touring style ’56 Bel Air Chris and his guys were putting the finishing touches on.

Listening to Chris explain it didn’t sound like ending up with a full-blown camera-ready SEMA show car was exactly what his customer was after, rather just a super clean ’56 Chevy that would handle as well as it could go. Good handling all starts with the chassis and with Art Morrison less than fifteen minutes away, the first step was to send the customer over to Art for a demonstration ride. Showing someone how good a car can handle is like a one-on-one karate demonstration; the demonstrator has to make it hurt to get the point across.

Built according to the dictates of good design and taste, what’s lacking from Holstrom Concepts’ ’56 Bel Air are the usual geegaws and gimmick styling cues the mainstream masses expect to find at SEMA each year. Notice an absence of Steampunk rivets, copper embellishments, brake dust wind-flow diverters and of course the obligatory exotic animal fur interior wrapped around a roll cage of epic kindergarten playground proportions. And that’s exactly what the customer ordered, a simple, yet beautiful, 1956 Chevy.