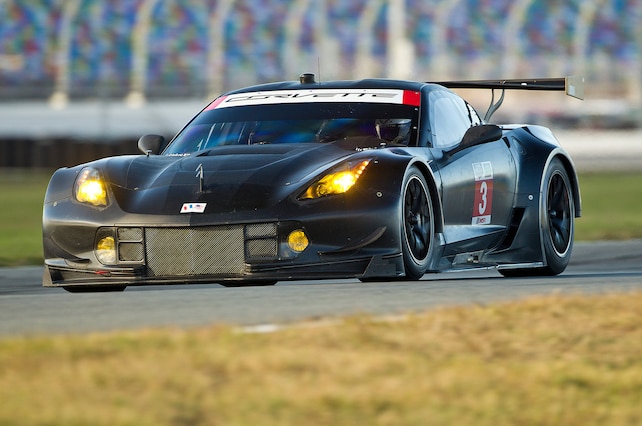 In the old days of the American Le Mans Series, Corvette Racing had almost six months between seasons. As a result of the merger with Grand Am, that time has been cut down to less than three months. Development and testing is now fast tracked during the season with final tests scheduled before the Rolex 24 in late January. With the changes in the rules for 2016, Pratt & Miller has designed and unveiled a new pair of C7.R’s that embrace those new regulations.

The first open test for competitors took place at Daytona International Speedway on November 17th and 18th. Both of the new C7.R’s, along with a trio of C7 Daytona Prototypes were in attendance for this closed to the public test. Wearing raw carbon fiber bodywork, and a myriad of sensors, the new C7.R’s took to the high banks of Daytona to continue their planned testing schedule. With a pair of private tests at Sebring already in the books, the 3.56-mile Daytona track allowed the team to gather fresh data for the upcoming start of the season. For 2016, the focus has been to improve the aero package and also incorporate enhanced safety features. The new car has a more aggressive setup with the addition of a larger front splitter and rear diffuser, along with side rocker splitters and a relocated rear wing. The new rules also require cars to have a roof mounted escape hatch to aid with driver extraction in case of an accident. While the GTLM cars are new, the trio of C7 Daytona Prototypes are a continuation from previous years without any significant changes.

Also leading up to this test, questions about next year’s driver line-ups were also a source of speculation. With Corvette Racing, that speculation was laid to rest. The full-season GTLM driver group stays intact. Jan Magnussen and Antonio Garcia will remain in the No. 3 Corvette, while Tommy Milner and Oliver Gavin stay in the No. 4 car. For the endurance races, some new faces will be behind the wheel for Daytona and Sebring. Audi factory drivers, Marcel Fässler and Mike Rockenfeller, will be the third drivers. Fässler is no stranger to the team. He had a brief stint with them in 2009 as a third driver for the endurance rounds. Jordan Taylor also returns to the squad for the Le Mans 24 Hours race and will be joined by his brother Ricky. It’s not clear yet which car either brother will be in, but the safe bet would be to have Jordan again paired with Gavin and Milner in an attempt to repeat their 2015 class win.

In the Daytona Prototype ranks, a number of driver changes have also taken place. The No. 90 Spirit of Daytona squad will be new for 2016. Ex Viper factory driver Marc Goossens along with Ryan Dalziel will be the regular season pair. Their third driver for the endurance events has yet to be hired. At Action Express Racing, the reigning series champions, João Barbosa and Christian Fittipaldi will again pair up in the No. 5 Mustang Sampling Corvette DP. Joining them will be five time Daytona winner, Scott Pruett. For the Rolex 24 he will pair up with Barbosa and Fittipald. He will join Eric Curran and Dane Cameron in the No. 31 Whelen/Team Fox Corvette DP in the other Action Express Racing entry for the Mobil 1 Twelve Hours of Sebring in March. Curran and Cameron will again be the pair at the helm of the Whelen entry for the regular season. Also testing with AXR was Audi factory driver Filipe Albuquerque and Team Penske IndyCar driver Simon Pagenaud. It’s not clear yet where either driver fits in, and there has been no official confirmation as to their inclusion in either squad.

The only Corvette DP team not present for the Daytona test was Wayne Taylor Racing. They will maintain the same pairing of Ricky and Jordan Taylor for the regular season races, and bring in Max Angelelli for the endurance rounds.

The next scheduled outing for all the teams will be at the Roar Before the Rolex 24 on January 8th to the 10th.