Pro Stock’s Future Injection:This is a column that i have been hoping to scribe for a long time 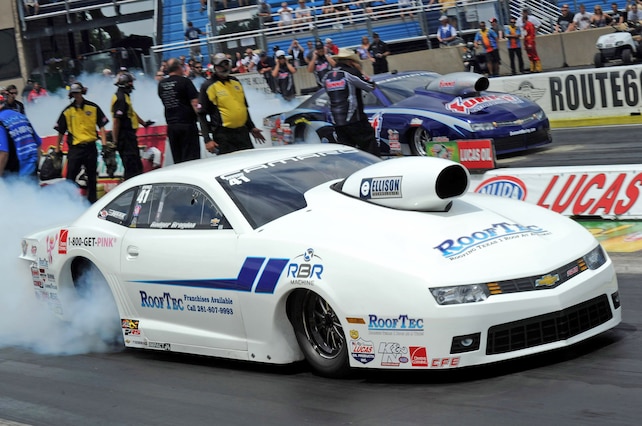 In late July, the NHRA —under the new leadership of recently appointed President Peter Clifford — made a very significant announcement with regards to the future of its Pro Stock category.

First of all, let me just say that I am unequivocally a big fan of Pro Stock racing – always have been, always will be – and I have also tried to take the position of being a drag racing fan sitting in the grandstands. From that top-down perspective, both the health and the appeal of NHRA’s Pro Stock class product has been waning for the last few seasons. The absolute runaway high cost, which has been limiting new teams access into the class, and the recent and often “short” fields were both evidence of something being not quite right. Regrettably, the word “stagnant” often comes to mind when talking about the class.

So with that racing fan point of view in mind, I believe NHRA’s new direction was both necessary and much overdue.

In a nutshell, the NHRA will take its class forward effectively immediately in a couple of waves of change. Their primary goals are to increase the spectator appeal for Pro Stock and to make the class more relevant from a technology standpoint.

The initial wave – a relatively minor ripple – began with the recent NHRA Sonoma Nationals where several changes were put into place.

The NHRA required teams to back their race cars into the pits and leave the engines uncovered so that spectators have better accessibility to see the race cars and interact with the drivers and crew members. A new rule also will discontinue the practice of crew members standing beside the cars to hold them in place as they begin their burnouts. Finally, the NHRA will make it mandatory for teams to create automobile manufacturer identification headers visible on the windshield up to a maximum of 4.5-inches high, but not smaller than 4.25 inches. Those initial moves were designed to increase spectator appeal and enhance the overall pit experience for fans. But the major and the most demanding tidal changes will not happen until the 2016 season.

Starting January 1, 2016, the NHRA will require all Pro Stock teams to equip their cars with electronically controlled throttle body fuel-injection systems, making engines more relevant from a technology standpoint. In order to reduce costs for the race teams, an NHRA-controlled 10,500-rpm rev limiter will be added to the fuel injection systems.

The NHRA will also require Pro Stock teams to remove all hoodscoops and reduce the length of the wheelie bars to a length specified by the NHRA Tech Department. Those changes are designed to make race car designs more relevant and to boost spectator appeal by increasing the unpredictability of the class through more wheels-up launches from the starting line.

“Pro Stock racing has a tremendous history with the NHRA and proves each weekend by the close side-by-side finishes that it is one of the most competitive forms of racing in all of motorsports,” said Peter Clifford. “Through these changes we hope to provide a platform so the Pro Stock class can evolve from a technological standpoint yet reconnect with its roots by generating more interest and appeal among spectators.”

It is those changes for next season that are causing much debate within Pro Stock racing’s existing team contingent. We contacted a number of teams for their opinions and a couple of common denominator concerns emerged. While most teams are comfortable with the new realities of utilizing fuel injection, there was real concern centered around two key aspects: how the rev limiter restriction and replacing hoodscoops with hood bumps will affect engine performance and race car aerodynamics.

“I think everybody in Pro Stock wanted change, and now we got change,” said Shane Gray, driver of the Gray Motorsports Chevrolet Camaro. “But it isn’t quite the change we wanted. With that being said, the only thing I strongly disagree with is the [NHRA-controlled 10,500] rev limiter. Most of these guys will have to revamp their engines to bring them down, and that is going to require cylinder head, camshaft, and valvetrain changes. None of that is cheap. It will be hard for some of these teams to do that.”

Justin Elkes, the Gray Motorsports Crew Chief added, “Moving forward to next year, it’s going to be a little bit of a challenge with all the rules that will be implemented, and we only have a couple of months to really get working on things – plus, we’ll have to maintain what we have now as we go into the Countdown to the Championship. It’s going to be a bit of a challenge, but I don’t disagree with the changes. Although some of them are good, the one that is hard to stomach, and I think everyone agrees on this, is the rev limiter rule. It’s going to cost all of the teams currently racing a tremendous amount of money. I think fuel injection will be good because the manufacturers will be more involved and it will hold the interest the younger fans.”

Needless to say, the debate on these changes will continue to amp up and probably some script the length of Leo Tolstoy’s War & Peace would be necessary to truly capture all the opinions.

But I can safely say that something had to be done, and I applaud the NHRA for finally doing it. But did they go far enough? Did they go in the right direction?

Personally, when I look at the very real success that NHRA has enjoyed with its Factory Stock Showdown program, which has thrived since its inception, I believe they should have used that as more of a template for Pro Stock.

For real modern-day racing fan recognition, there is no mistaking a COPO Camaro, Cobra Jet Mustang, or Drag Pak Challenger in that eliminator. By taking its Pro Stock class much closer to that factory-car configuration (with 500 ci and fuel injection), not only would fan identification be a guarantee, it would lower the cost platform allowing for – very importantly – much easier and increased participation into the class.

I also think that the NHRA should be putting more focus on promoting the Pro Mod class as its ultimate, radical door-slammer category for the future, and in parallel, make the long-term focus of the Pro Stock class all about being identifiable and paving the way for more team and manufacturer participation.

Well, at least with these upcoming moves announced by the NHRA, while not optimum yet, gets us all partially there.

The face of NHRA Pro Stock racing is going to change rather radically beginning next season. While we cannot (for obvious reasons) give you an exact image of what a 2016 NHRA Pro Stocker will look like, we can suggest that Chuck Haubiel’s new Competition Eliminator 2015 Camaro would probably be a close representation.

While the NHRA’s announcement of revamped rules for Pro Stock drag racing is an important step for its future, the question remains, did they go far enough to ensure the-long-term participation in the class? We’d like to envision Pro Stock with factory configuration COPO cars (like this) but with 500ci engines, big tires, and entry lists of 50+ cars per event. How cool would that be?