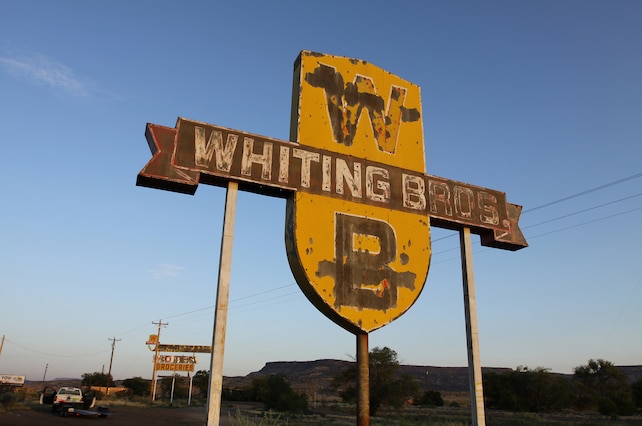 In the summer of 2015, I was driving on Interstate 40 through New Mexico on my way home to California from a Colorado car show. Just as the sun was setting, I thought I spotted the ruins of an old Whiting Brothers gas station up on old Route 66. A few miles further up I-40 in Grants, New Mexico, I checked into a motel for the night. The next morning, just before sunrise, I found a side road leading to old Route 66 and backtracked until I found the Whiting Brothers visible from down on I-40.

The memories all came rushing back. My mom and I filled up at this Whiting Brothers station in 1966 while returning to California with the ’57 Chevy Bel Air my recently deceased great aunt bought brand-new in Stockbridge, Michigan. The first time I saw my great aunt and uncle’s ’57 Bel Air was in 1957 as a 5-year-old car-crazy kid on summer vacation in Michigan. In 1962, my parents stuck me on a Detroit Metro bound DC-10 and I spent the summer plowing fields with a ’47 Allis Chalmers tractor and lusting after Aunt Mabel’s Tropical-Turquoise-with-a-white-top ’57 Bel Air. I don’t remember boldly telling Aunt Mabel or Uncle John I wanted the ’57 when they died, but it was very clear I wanted that ’57 Chevy to be my first car.

When Aunt Mabel’s will was read, there was no mention of the ’57 Bel Air, but her son Robert Rockwell remembered me and sold us the ’57 Chevy with 17,000 original miles for $50.

The Whiting Brothers Route 66 chain of “gas for less” stations lasted from 1926 until the early 1990s. You can conduct a Google image search to enjoy a photographic tour through time of this Whiting Brothers station located 10 miles east of Grants, New Mexico, in between San Fidel and McCartys. In 2015, when I saw it last, the gas station was barely standing. It’s quite possible by 2016 it will collapse completely and the only landmarks left will be the two big Whiting Brothers signs barely visible from I-40.