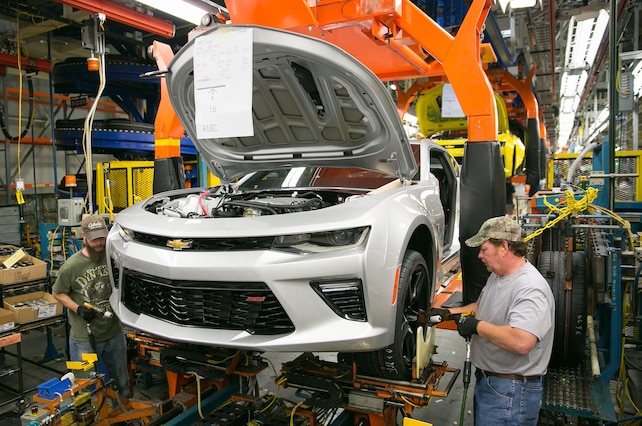 GM is investing $1.2 billion into its Fort Wayne, Ind. plant where the full-size Chevrolet Silverado and GMC Sierra pickups are built. Another $175 million is being invested into the Lansing, Mich. plant in preparation to build the 2016 Chevrolet Camaro. The investments are part of the $5.4 billion GM said it would invest in its North American plants back in April.

GM is investing in new tooling and equipment to build the sixth-generation 2016 Chevrolet Camaro at the Lansing Grand River Assembly Plant. Upgrades include three new paint systems for Camaro-exclusive colors, including Summit White, Bright Yellow, and Red Hot, as well as the addition of two robotic framers that are said to provide better dimensional control. Additionally, the plant will resume its second shift, reinstating 500 jobs later this year.

Meanwhile, the full-size truck plant in Fort Wayne will receive new technological and environmental upgrades, according to GM. Paint shop upgrades include a new pre-treatment facility featuring thin-film paint pretreatment, E-coat paint customized to each vehicle type that is said to improve coverage and curability, and a new GM-patented radiant tube ovens for higher paint finish and lower energy use. Other upgrades include new equipment to place various cab and bed combinations on the chassis and new skillet conveyance systems to improve worker ergonomics for instrument panel assembly.