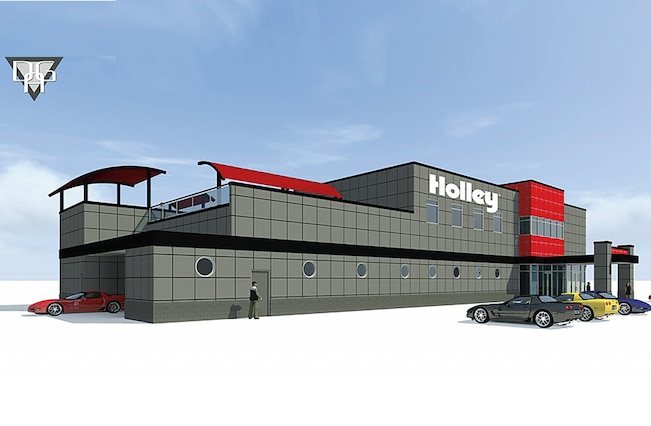 Holley Performance is proud to announce a new partnership with the NCM (National Corvette Museum) Motorsports Park, and is sponsoring the Park’s Control Tower and Event Center in Bowling Green, KY.

“It is only fitting that two great American motorsport brands like Corvette and Holley unite with our sponsorship of the NCM Motorsports Park,” said Trevor Wiggins, Holley VP of Sales. “This track is going to secure Bowling Green’s identity as a motorsports town and we’re proud to be a part of it.”

The two-level Holley Control Tower and Event Center will feature 6,300 square feet on each level (12,600 total in building) including 1,800 square feet of meeting and classroom space, lobby/retail area, restrooms, catering kitchen, reception office, administrative offices, race control room, storage and more. The second level will feature a 2,100-sq-ft open-air viewing deck, available for private events. A Winners’ Circle Podium is slated for the paddock side of the building, and the overall design of the Holley Control Tower and Event Center mimics that of the Museum.

“We have been talking to Holley since we first announced that we were building a Motorsports Park and they were as excited as we were,” said Mitch Wright, General Manager of the NCM Motorsports Park. “Those conversations grew into something bigger and we are thrilled to have them on board.”

Construction on the Holley Control Tower and Event Center is planned for 2015.

Is there a regular mailing address for rides material?

We get this a lot, so I wanted to make sure everyone had access to our email address at chevyhi@sorc.com. Thanks and keep sending in your cool rides for us to showcase!

Not an LS fan?

I restore old muscle cars and mainly use big-block Chevy engines. Looking at these old muscle cars with new LS-based engines makes me sick. For one thing they are ugly and for another they are super expensive to keep up. For instance, let one of those coil packs go out and you will see what I mean. I get so sick of looking at ’69 Camaros with the “quick, hurry, go to the junkyard mentality. Get a truck engine and throw in it because I don’t want to take time to build an engine.” Man, I don’t care if they make 1,000 hp, they are still ugly! Then they know they are ugly so they try to cover ugly up with plastic ugly covers. Give me a break. I love to see a big-block or a small-bock with those pretty valve covers and the engine bay looking like it’s supposed to—nicely finished and uncluttered. I’m sorry, I’m just absolutely sick of seeing easy-to-get engines thrown into everything just because people are in a hurry. It’s like beauty and the beast!

We dig the traditional small- and big-blocks, but we’re also big fans of the LS powerplants. We do our best to feature a wide variety of cars with different engine packages. However, a lot of folks are making the LS movement and that’s just the way it is. As for us, we’ll continue to feature the cool rides, different engine combinations, and hopefully, we’ll even cover the topics that will continue to pique your interest. Thanks for writing in.

2014 Optima Ultimate Street Car Invitational will be held at LVMS
James Shipka: We’ll be back with the OLC!
Wimpie Lotter: I like it!

642hp Iron Head Build
Paige Sullivan: Now you are on the right track!
Cathy Crader: That is some power!
Jim Wagner: Big time muscle.
Duane Jones: This would be great in a ’76 Vega.
Jeff Autrey: Need one...

This ‘71 Chevy Nova is Wicked, Fast, & Fun!
Cherie Moffett: My favorite car ever and I had one when I was 19.
Mable Clark: That almost looks like mine.
Marie Granados: I fell in love with this beauty.
Duane Findley: Sweet looking ride!
Elaine Ramirez: I want it!