Newsletter
Sign Up today for our FREE Newsletter and get the latest articles and news delivered right to your inbox.
Home
Camaro Performers
News

Tom Bailey Wants to Make History in Drag Week 2015, And You Can Help! 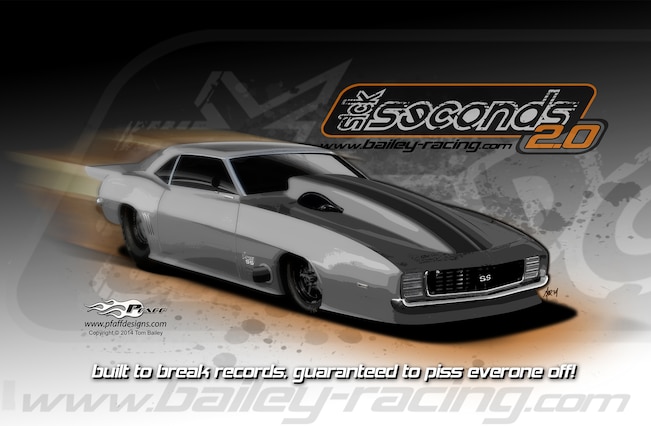 When Tom Bailey first brought out his Pro-Mod-looking ’69 Camaro to HOT ROD’s drag racing endurance race, he had ambitious goals, not just to be the first all 6-second average on Drag Week, but also to drive a car that pushed the boundaries of people’s acceptance as a street car. He failed. All that did was make him try harder, and in 2013 he achieved both his goals, and became the first ever 6-second average and took an overall win. Bailey has always told us that when people doubt him, it only makes him work that much harder to prove them wrong. He’s got incredible plans for Drag Week 2015, and he wants HOT ROD’s readers to be a part of it. On the Bailey Racing Facebook Page he says, "You need to blow the box apart! It is about pushing the limits and setting goals and going after it. There are a lot of followers out there that chase what somebody else has already done. Innovators create their own path even when they are told it isn't possible. As we make changes, the goals are simple: 300MPH in the standing mile, and 5.50 quarter mile (e.t.). And we will drive it home.”

Did you get that last part? 5.50 e.t.s in the quarter? Yeah, that is less than a year from now, and thus far, nobody has ever even dipped into the 6.00s at Drag Week, so 5.50s is a very high bar to reach. Remember too that Bailey isn’t the only one hoping to be the first Drag Weeker in the 5s. You will not want to miss a single run of Drag Week 2015.

We’ll be following all the big dogs as they prepare their rides for next year’s race. You can follow along too, Tom’s online at BaileyRacing. Bailey says he wants input from readers as to next year’s paint scheme on his car, so keep your eyes peeled for a chance to vote.