Unique Car/Truck Hybrid Lives on In Hearts of Enthusiasts 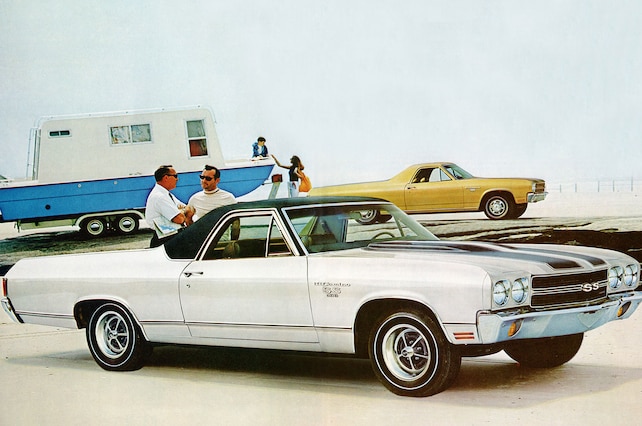 Generally, there are truck guys, and then there are car guys. While there may be some shared interests, typically, their vehicular tastes don’t converge. But in the case of the Chevrolet El Camino, the unique car/truck hybrid had something for everyone. The El Camino went on sale as a ’59 model based of the Impala/Bel Air platform. The body style popularized the term “business in the front, party in the back.” In the ’60s and ’70s, the El Camino was essentially a Chevelle with a bed and was likewise offered in SS high-performance trim, with an engine as big as a 454 ci big-block V-8. A few extremely rare El Caminos were produced with the iconic LS6 engine, with as much as 450 hp.

In its later years, the El Camino transitioned on to General Motors’ G-Body platform, shared with the Chevrolet Malibu, Monte Carlo, Buick Regal, and Oldsmobile Cutlass. A companion GMC model was first sold as the Sprint and later as the Caballero.

Prior to its 2009 bankruptcy, plans were in place to import the Holden Maloo ute from Australia as the Pontiac G8 ST, essentially bringing back a modern-day El Camino, but the Pontiac brand was killed off as part of the company’s restructuring, and the would-be El Camino revival never came to fruition. With GM’s announcement that it’s permanently ceasing operations in Australia by 2017, the likelihood of the El Camino ever making a return to the U.S. market remains slim to none. However, GM’s unusual car-truck contraption will be fondly remembered for its more than 30-year production run.