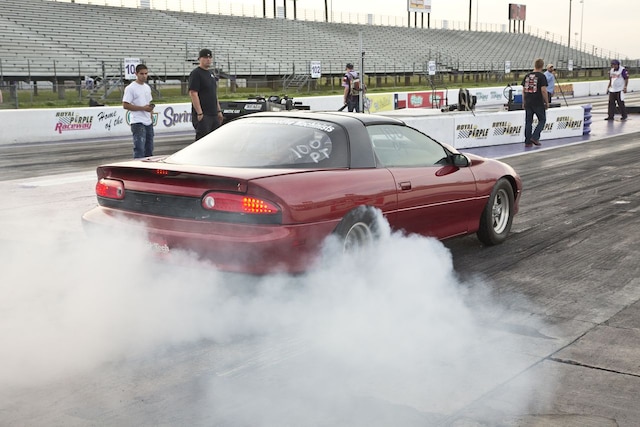 This issue marks my eighth installment as the Editor of the number-one late-model GM magazine on the planet, and I’ve never felt more at home in a position than ever before. In the short time I’ve been Editor, I’ve brought new ideas, tons of insight, and an increased enthusiasm for the brand. I’ve turned 27,000 followers on our Facebook page, into close to 1.2 million—in six months. During my tenure, we’ve added more videos to our YouTube channel, and pushed social media endlessly

You’ve begged me for more variety in terms of feature cars, and I’ve brought them to you. I’ve featured several types of vehicles that have never been seen before in these pages; cars like the AWD LS-swapped Cutlass (Apr. ’14), the 800 fwhp ’07 Monte SS (Feb. ’14), and the two Kappa roadsters found in the previous issue. If you turn to page 18, you’ll see the very first Cobalt SS ever featured in a non-tech related story in these pages (it puts down 463 hp to the tires, so relax).

After several months of being in limbo, I was finally able to arrange for the GMHTP Camaro to get wrapped. I organized, covered, and finished the entire build from start to finish on Track Attack Z06 with MTI Racing in one week (featured in installments over the next five issues), and by the end of the year, my goal is to have Parker’s “G-Machine” Buick, “The Purp” Camaro, and Cesler’s “SALT” Trans Am finished—all three of which have been long-term projects that I’m excited to wrap them up and see how they perform. For you third-gen fans out there, Steve Baur’s ’87 “Lethal Weapon” Formula should be back on the road by the time you read this, too.

However over the course of the last few months, I’ve managed to misspell a word or two along the way, and for that, I feel that I’ve let you down—seriously. Blame the software, deadlines, or general human errors, but they do happen from time to time.

It comes with the territory, though. I pick the cover, and write the blurbs that get plastered all over it. I choose which cars get featured, what tech gets covered, the reader’s rides (Street Heat), and the new products to showcase in Cutting Edge each month. I respond to our readers in the Off the Wire column, I write the monthly Bumpin’ In editorial (obviously), and I feature the latest industry news in The Buzz section. But it doesn’t stop there.

I read each and every one of your letters, emails, and social media comments on Facebook, Twitter, and Instagram. I post all of the content there too, unless I’m on a business trip for more than three days. I order all of the parts that get installed into all, count ‘em, ten GMHTP project cars (five of which I’ve inherited), plus the miscellaneous projects that find thier way into our shop. I also, on occasion, get to play salesman, working with all of our clients (advertisers to you), to maintain long-lasting relationships that will help continue to bring GMHTP to your door nine months out of the year.

Speaking of which, I’m actually doing everything I can to raise the page count and annual amount of issues that you receive in your mailbox, and download, with our downloadable versions found on Zinio, iTunes, and Kindle. I’d like to see GMTHP go from the current nine issues, to a monthly twelve during my tenure. It’s not going to be easy. I can’t even promise that it will happen, especially with our ever-expanding online content found on GMHighTechPerformance.com, that brings you tons of online-exclusive material, including videos, that you can view at your fingertips through your tablet or smartphone. Oh, and GMHTP is a downloadable app as well these days.

Naturally, I write online-exclusive articles, too, and assign stories for both GMHTP print and online to my freelancers. I write the scripts (when the videos are scripted, I prefer improv) for the YouTube channel videos that I create and also “star in,” and continually come up with new ideas for said channel. I’m actually working on a GMHTP-exclusive YouTube “TV show” now (ala’ Roadkill), in conjunction with our now ongoing “GMHTP at PBIR” series, and our recently launched “Project Cheap-G” Monte Carlo SS.

Throw in the fact that I travel all over the country for SEMA, PRI, LSX Challenge Series coverage, the Buick GS Nationals, along with a few planned surprises that I have up my sleeve, and to say that “I’m busy,” would be a huge understatement. By the time you read this, I would have become a new father to my first child as well. For you parents out there, you know how much time out of your day that can consume in and of itself.

I don’t think I’m doing too terribly, though, considering one of my well-respected colleagues shared with me the other day that I’m, and I quote, “one of the true people in this industry that loves what they do, and [I] continue to do great things.” Apparently, he’s not alone, as Greg Lovell of AntiVenom told me last week over lunch that I remind him of an “enthusiastic, crazy terrier that wants to tear into everything,” in regards to my work ethic. In hindsight, they’re probably right.

The future of GM High-Tech Performance is looking brighter and brighter with each passing day; as usual, all of our numbers are up, we’re featuring and building an array of badass cars that you care about, we’re embracing the technology of the 21st Century more than ever, and in my opinion, better than our closest competitors.

From here on out, I’ll do my best to put my eagle-eyed glasses on when I’m proofing a story, but just in case something manages to slip by, hopefully, you’ll forgive me.