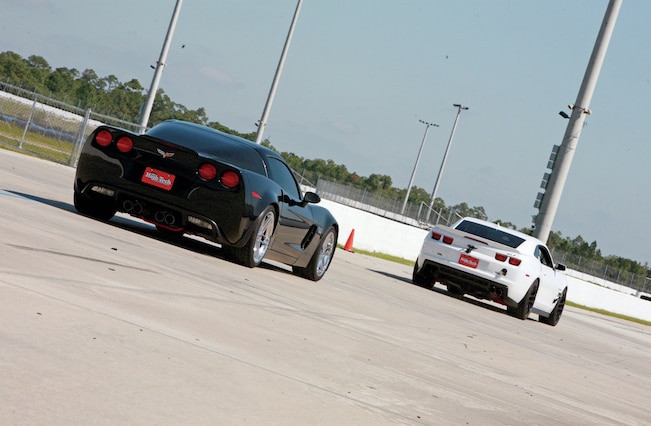 You may notice something a bit different in The Buzz column for this particular installment of GMHTP. Rather than show you industry news that will be as stale as three-month-old Doritos by the time this hits your mailbox, I’ve elected to give our readers a heads up on what we’re working on for our YouTube channel (YouTube.com/GMHighTechMag). If you would rather see updates like this rather than outdated news on this page, let me know!

A few months back, we took some of our latest project cars to Palm Beach International Raceway (PBIR) for some baseline testing. We brought out our 2012 ProCharged Camaro SS (Project G.M.H.T.P), 2012 ZL1 (Project Apex Assassin), 2008 Corvette Z06 (Project Track Attack), along with AntiVenom’s 2000 Corvette and 2004 Silverado projects. It’s not just boring on-track footage without any dialogue, either. We interview the drivers, update you on what’s been done to the cars, and clue you in on what we have planned for the next round of mods. After uploading the first video onto our YouTube channel, our website at GMHighTechPerformance.com, and getting the word out via our social media outlets like Facebook, Twitter, and Instagram, the feedback we’ve received has been big! It’s been so popular in fact that we’ve decided to make it an ongoing series. By the time you read this, Part II will have been shot, edited, and online! But don’t think it’s just going to be those five vehicles over and over again. Oh, no. We’ll be featuring different project vehicles as cars get completed, and new ones get introduced; including old-school cars, like our Project Lethal Weapon ’87 Formula, Project Wicked6 ’87 GN, and even a few surprises along the way. Check it out, here: http://bit.ly/1do7yX5.
3/5

This is an ’87 Monte Carlo SS project that we’ve recently picked up (what is it with these 1987 cars, anyway?), and it is going to be an honest-to-goodness total budget build. Although it will receive the inevitable LS swap for the sake of a solid, reliable, trouble-free powerplant, it will be by way of a junkyard donor. No “big-money” crate engine. No “fancy suspension” that’s worth more than the car—just affordable, budget-friendly (or even free), modifications that the average do-it-yourselfer can do in his driveway. In terms of the car, it’s totally solid. It has the original drivetrain, and it could use a lot of love. We scored it super cheap, and it really is a real-world representation of what most of our readers own. Probably worse, actually. By the time this issue hits your ‘box, we would have uploaded the first video. Like the ‘PBIR series, it will be it’s own series that our viewers can follow along with as the car progresses. We think you’ll enjoy it. If you don’t, I’m 100 percent sure you will tell us.
4/5

Yup, seriously. Well, sort of. We are in the process of putting together a monthly “TV show” for our YouTube channel that takes us on road trips, documents project builds, and will generally be us goofing off along the way. Somewhat similar to what you see on our Hot Rod Magazine colleagues’ Roadkill show – just with all late-model GM toys. We’ll even feature some of our friends in the tuning world and the aftermarket, too. Initially, it might not be as “polished” as Roadkill, if you can call it that. But as things progress and we find our niche, it will be something you can tune into monthly and fall in love with. Even if you hate us. We already have a few things on the drawing board now that we’re sure you’ll enjoy.
5/5