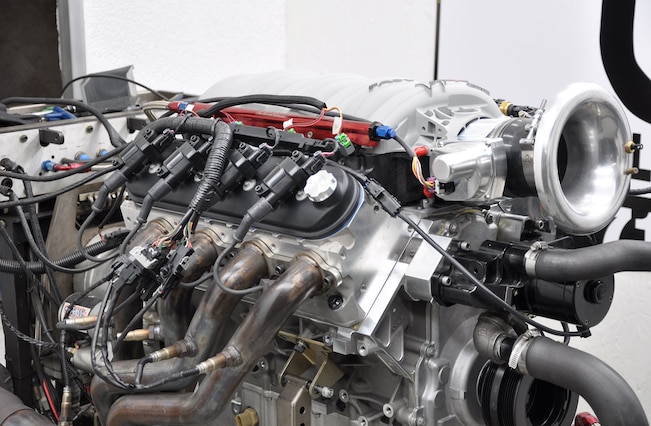 My name is Sonny, and I’m an avid reader of GMHTP. My purpose for contacting you is that I’m looking for some information or parts suggestions for the GM Vortec 8100. This engine has been around since the early 2000s, but highly ignored by the aftermarket and enthusiast community, which is totally beyond my understanding when you consider that it comes with 496 cubic inches in tall-deck BBC fashion. I just so happen to have one of these engines sitting partially disassembled on an engine stand in my garage, which I’m anxiously anticipating to build for my ’94 Impala SS. I’m thinking a .030 overbore with forged pistons and rods, a polished and knife-edged stock crank and topped off with a 76mm or 88mm turbo. Could you point me in the right direction to someone who can rework the factory heads without killing power, or my wallet with high costs? Also, what are the differences between the 6L90E and 6L80E transmissions? I’m considering either one of those, or a 4L80E to stick behind the 8100. I look forward to your response in a future issue, and keep the excellent features coming!

Sonny, admittingly, the 8100 is a pretty obscure engine in the hobby, despite it’s attributes of massive cubic inches and EFI. Although I’ve never tangled with one personally, it turns out there are plenty of friends of the 8100 in the aftermarket who have – particularly in the performance boating scene. Our friends at Accel, COMP Cams, and many others, offer both bolt-on and hard parts for this engine. There’s even a company called Raylar, that specialize in these engines – including offering their customers cylinder heads, camshafts, intake manifolds, and stroker kits! Check them out at raylarengineering.com! The six-speed autos you’ve mentioned would certainly add to the cool factor, but in terms of cost and simplicities sake, I would just go with the 4L80E and call it a day.

I was wondering what engines could be swapped into a 2003 Grand Am GT. I don’t want to go crazy with power, or build a race car. I just want something a little bit different. Would it be possible to swap in a 3.8L supercharged V-6 from a Grand Prix GTP?

Michael, even though I’ve owned a GTP myself in the past, I’ve never swapped an L67 into an N-body Grand Am before – however, quite a few people have. From everything I’ve read, it’s quite a chore, and requires some modifications to the engine bay. You’ll also have to replace (and modify) the entire subframe, the transmission, and ECU from a GTP donor car. You’ll also have to fabricate a set of hybrid axles that will work in the GTP-sourced 4T65E, and Grand Am hubs. And since the engine/blower combination is quite a bit heavier than your 3400 V-6, you’ll have to use different front springs. I dig the “dare to be different” vibe of this potential project, but if it were me, I’d sell the car and simply find a replacement GTP due to the cost, although I’d be attracted to the challenge. It’s something you’ll really have to think about. But if you go through with it – contact me when it’s done!

I am doing an LS3 swap into an ’86 IROC-Z, and when I start up my 480 hp LS3 for the first time, what oil type should I use? I was thinking regular 5w-30 to start then Mobil 1 5w-30 synthetic after 500 miles. What are the start-up and break-in procedures that I should follow?

Joseph, no matter who you ask, you’ll always get a different response. I’m assuming you’re using a Chevrolet Performance 480 hp LS3 crate engine, and if so, Mobil-1 5w30 will work fine. As a rule of thumb, always be sure that you have good oil pressure, and that it holds coolant temperature properly. Chevrolet Performance designs these engines for longevity, and every crate engine that they build receive the same strict guidelines found in their production cars.

Please send all letters to: Rick.Seitz@sorc.com, or mail to: GM High-Tech Performance, 9036 Brittany Way, Tampa, FL 33619. All letters are presumed for publication and GMHTP reserves the right to edit all letters.