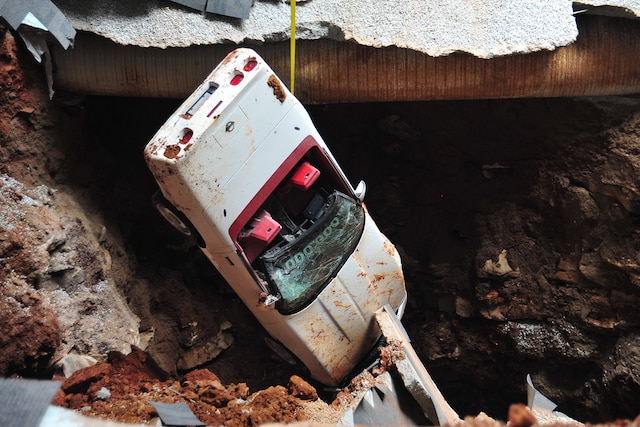 Four of the eight Corvettes that fell into a sinkhole under the National Corvette Museum’s Skydome last month have now been recovered—with the latest one, the “1,000,000th Corvette”—emerging today, earlier than planned.

Here’s the word on the rescue of this milestone C4 from the National Corvette Museum:

In an unexpected turn of events, the Millionth Corvette was resurrected from the depths of the sinkhole today.

"Initially there was no intention to bring the Millionth out, but as we got in there and saw more this morning we did feel like this might be our best chance," says Danny Daniel, President of Scott, Murphy and Daniel Construction.

Danny indicated that they pulled the car by one wheel from where it was lodged and it swung free into the cavern. They were then able to lift the car and place it to rest, upside down on the bottom of the sinkhole. Finally, the Corvette was hooked up by its two tires for final lifting out of the sinkhole, much like the process to retrieve the 1993 40th Anniversary.

"Went like a champ, we were tickled to death," added Daniel.

"The Millionth Corvette has been through a lot, but the damage at first glance seems to be less extensive than what it could have been, especially given the precarious spot the car landed," said Bob Hellmann, Facilities and Displays Manager at the Museum. "The undercarriage and frame look to be in good condition and everything else is repairable."

The Millionth Corvette was built at 2:00 pm on July 2, 1992 in Bowling Green, Kentucky. Just like the first 1953 Corvettes, it bears a white exterior, red interior and is a convertible. The car was donated to the Corvette Museum by General Motors. In a press release from 1991, Jim Perkins, General Manager for Chevrolet at the time, said "We've been looking for a way to support the goals of the museum, which are to enshrine a great car and the great people who made it an American institution." This donation came two years before the museum that exists today had opened its doors.

"I couldn't afford Corvettes when I was growing up," Perkins said in a 1991 release. "Not many could. But it was enough to know it was a Chevy just as sure as the one I could afford. And that hasn't changed. There's still a little bit of Corvette lurking in every Chevy today. And there will be for a long time to come."

More than 20 years later, Perkins was right. There were and still are many great Corvettes to come. The Museum now has half of the cars recovered from the sinkhole and on display, and in a few weeks hopes to be adding four more cars for visitors to see. Construction crews will continue the stabilization of the spire and walls of the sinkhole before attempting to vacuum out the dirt from around the remaining cars.

"We appreciate all of the support and interest from Corvette and auto enthusiasts around the world," said Wendell Strode, Museum Executive Director. "We still have a long road ahead, lots of repairs to make but we are confident we will come out better than ever. We hope folks will consider registering for our Bash event in April, stopping by when their travels take them through Bowling Green this summer, or make plans to caravan here with about 10,000 of our closest friends in August!"

Links to photos, videos and press releases are available on the Museum's website at www.corvettemuseum.org. For the latest updates visit the Museum’s Facebook Fan page at www.facebook.com/corvettemuseum.

High resolution photos of the car recovery are available on the Museum's Smug Mug account at: http://corvettemuseum.smugmug.com/Events/Sinkhole

Videos will be posted as they are available on the Museum's YouTube here.

The 1-millionth production Corvette, a 1992 model, was one of three cars deemed repairable after the NCM sinkhole disaster.

» Read More
The One in a Million 1992 Chevrolet Corvette