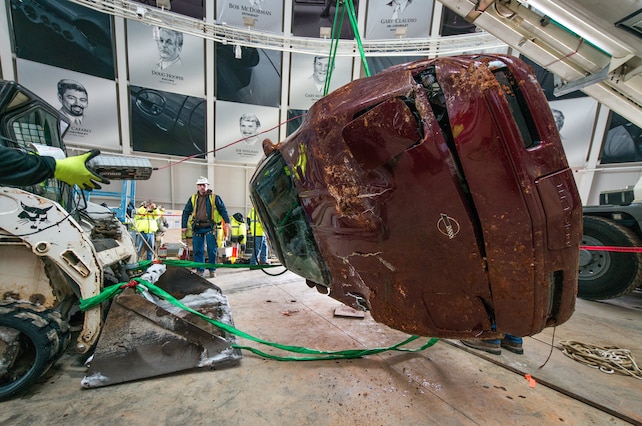 One more Corvette has emerged from the sinkhole that opened up under the National Corvette Museum’s Skydome—but this one will need more than just a good cleaning.

“Ruby”—the 1993 Corvette 40th Anniversary Edition coupe—emerged from the sinkhole yesterday afternoon, the second of the eight Corvettes that were trapped by the collapse of the ground beneath the Museum’s Skydome on February 12.

As you can see, “Ruby” sustained more than a little damage, and will benefit from a full-on restoration at the GM Tech Center in Warren, Michigan, by the crew at GM Design’s Mechanical Assembly facility.

As for the other six Corvettes that are still in the sinkhole, the “carchaeologists” on scene will continue their recovery work later this morning. Check back here later today for more pictures, video, and Vette-recovery news.

For more info on the NCM sinkhole, see our previous coverage:

And to watch live streaming of the excavation click here:

If you are not sick of hearing about the National Corvette Museum sinkhole, then it’s worth viewing this mini-documentary detailing 5 of 8 Corvettes removed.

Check out Ray Hart's 1993 C4 Corvette, although not originally the special anniversary edition, he has enough mods to call it one! More in Corvette Fever Magazine.

Officer Joni Page, on her off time knows how to have fun with her supercharged 1993 Corvette Convertible - Vette Magazine