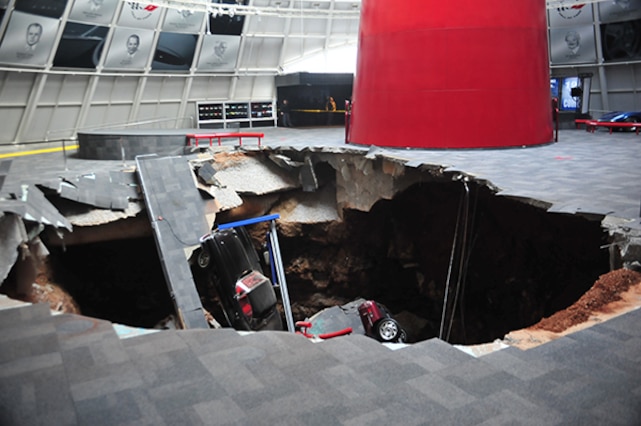 A 40-foot sinkhole swallowed eight cars at the National Corvette Museum this morning. In an official release the NCM stated that at 5:44a.m. the security company notified the staff that the motion detectors had gone off in the Skydome area of the Museum. When they arrived it was apparent that a sinkhole had opened up, and eventually grew 25- to 30-feet deep.

The Skydome houses some of the most iconic and historic Corvettes. While two cars belonged to General Motors, a 1993 ZR-1 Spyder and 2009 ZR1 “Blue Devil,” the other six were owned by the museum. The list includes a black 1962 model, 1984 PPG Pace Car, white 1992 1 Millionth Corvette, 1993 Ruby Red 40th Anniversary, 2001 Mallett Hammer Z06, and a 2009 White 1.5 Millionth Corvette. Only one car was salvaged by the staff before the emergency crew made them vacate, which (thankfully) was the 1983 model.

Stay tuned for updates as this story progresses. At present a structural engineer is on the premises to assessing the damage and stability of the area, and the museum is closed for the day. With the upcoming opening of the NCM Motorsports Park and National Corvette Caravan upcoming (August 27-30), the museum hopes to be up and running in the very near future.

Update: we have confirmation from Greg Lovell of AntiVenom that the 2001 Corvette was donated just last month by his customer, Kevin Helmintoller. Let's all bow our heads in silence for the loss of such a great machine.

Here are some pictures of the Skydome from our last visit to the NCM, for the full story click here.