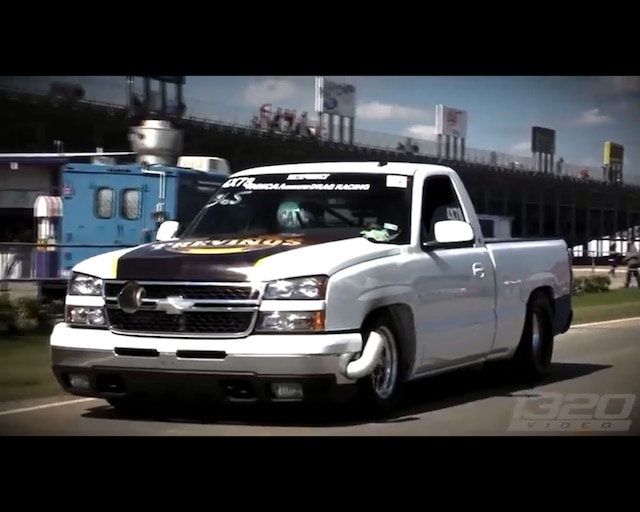 Want to see what an insanely fast truck looks like resetting a quarter-mile world record? Then you absolutely HAVE to watch the video below. Check out Rigo Trevino’s 2004 Chevrolet Silverado laying it down at 2013 October Truck Madness at Royal Purple Raceway in Baytown, Texas – an event put on by Houston Performance Trucks. It set the ’99 and newer (4,000-pound) Chevy Pickup World Record with the pass in the video employing a 427 cubic-inch engine fed by a Precision 114mm turbocharger (no, that’s not a typo).

“We’re starting at ten pounds and ending up at about 32 pounds,” Trevino explained before his runs. According to Trevino, the truck produces approximately 1,700 horsepower.

Previously, Trevino and his Silverado held the record in the 8.40’s, but they tried again anyway and romped into 8.16-second territory before turning in a clean pair of 8.07-second runs (at 178mph and 179mph) with boost bumped up to 40 pounds. They were shooting to break into the 7-second range, but their day unfortunately ended with a lifted head gasket.

Check out the video below, which was recently posted to 1320video’s YouTube channel. Seriously, you won’t regret it.

Check out this 2004 Chevrolet Silverado that features a LM4/LM7 block, Garret T61 turbo, Eibach springs, and more only at www.gmhightechperformance.com, the official website for GM High-Tech Performance Magazine!

Read the Chevy High-Performance tech article on How to Program an OBD-II Powertrain Control Module.

At first it seemed hard for us to believe, a supercharged Silverado with a warranty? Check out this tricked-out truck from Joe Gibbs.

The Review is in and the 2004 Chevrolet Silverado SS 1500 is noticeably quicker than a 5.3 Silverado with handling reminiscent of its predecessor the 454SS, but it could use 100 more horespower. - Super Chevy Magazine

GM had the entire lineup of vehicles to drive on the last day which included the Monte Carlo SS, esteemed SSR and the Silverado SS. - Super Chevy Magazine