2015 Chevrolet Corvette Z06 the History of a Legend

We explore all seven generations of the Z06 option package 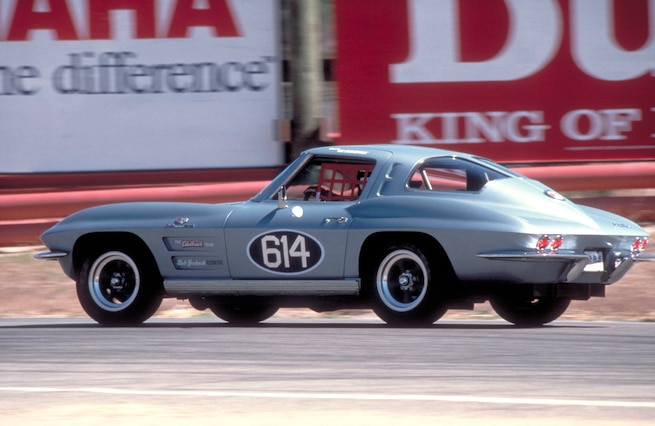 The Corvette Z06 package lives on! Officially announced on January 14, 2014, Chevrolet will produce the legendary Z06 and Z07 packages on the all-new C7 Corvette platforms. Equipped with a LT4 6.2L supercharged engine that produces 625 hp and 635 lb-ft of twist, the 2015 Chevrolet Corvette Z06 is by far the most capable track-ready Corvette ever produced.

The Z06 has long been a package offered for the Corvette. Available in four of seven production generations, the Z06 package has always stood for power, aerodynamics, and increased braking. The main focus has been a track-ready car that comes with all you need to be a weekend warrior.

The Z06 began with the second generation of Corvette in 1963. The focus at the time was handling, braking, and increased fuel capacity. A larger fuel tank was installed on a select number of Corvettes in the early ‘60s (only 63 were built with this option). A fuel-injected 327-cubic-inch small block was the available powertrain option, producing 360 hp through a four-speed manual transmission. Positraction ensured the rear axle hooked when the driver punched the gas. Also just as noteworthy, during the second-gen Corvette’s run, only 199 Z06s were built.

The next Z06 to hit showroom floors was the fifth-generation Corvette (2001-2004). This time, the focus was a lower curb weight. Chevrolet installed thinner glass and a fixed-roof hardtop body to achieve some of the weight reduction efforts. A titanium exhaust system was also installed to relieve weight. A stoutly LS6 small block engine that produced 405 hp was wedged between the fenders; harnessing the power was a six-speed manual transmission. The total production run of Z06 C5s built was 28,388.

The most recent Z06 to go into production was the sixth-generation (2006-2013) Corvette. Again, reducing weight was the name of the game. A bespoke aluminum frame that was 136 pounds lighter than the steel frame made the weight reduction possible. A LS7 7.0L small-block with 505 hp continued the legacy of power in the Corvette Z06. The engine featured titanium connecting rods and a dry-sump oiling system. To make the Z06 more of a force on the track and to up the ante, Chevrolet made a carbon-ceramic brake as an option to increase stopping power and provide almost no brake fade. A set of Michelin Pilot Sport Cup tires to help grip the pavement. During that generation, only 27,979 C6, Z06s were built.

The all-new seventh generation Corvette (2015) will now carry the torch for the Z06 package. Redesigned for the 2014 model year, the C7 platform has been much improved and will undoubtedly make the Z06 the most impressive version yet. Packing a LT4 6.2L supercharged V-8 engine capable of 625 hp and 635 lb-ft of torque, the 2015 Corvette Z06 is an impressive force. The engine will breathe more efficiently due to Rotocast A356T6 aluminum cylinder heads and lightweight titanium intake valves. A dry-sump oiling system will even keep the moving parts from generating too much friction. Expect a heftily 10.0:1 compression ratio to help turn the forged aluminum pistons, while a stainless steel exhaust feeds fumes toward the rear of the car. Customers will have the choice of two transmissions to control the all-new Z06: Either a seven-speed manual with Active Rev Match or a paddle-shift eight-speed automatic transmission (8L90). Both transmissions will offer a high-intensity experience on the road.

The 2015 Chevrolet Corvette Z06 will have a stiffer aluminum frame than the standard base Vette. Brembo brakes will handle stopping duties at all four corners with two-piece steel rotors 14.6x1.3-inch up front and 14.4x1-inch in the rear. The Z06 will also get aluminum six-piston (front) and four-piston (rear) fixed calipers. Wheels are spin cast-aluminum and will measure in a 19x10-inch up front with a 20x12-inch out back – an improvement over the standard Stingray wheels. The wheels will be wrapped in P285/30ZR19 (front) and P335/25ZR20 (rear).

On top of the Z06 platform, a more improved Z07 option can be added for more cash. The Z07 package starts with improved brakes and tires. Expect 15.5x1.4-inch front and 15.3x1.3-inch rear carbon ceramic-matrix brakes that are 23 pounds lighter than the standard Z06 rotors. Wrapping the wheels on the Z07 will be Michelin Pilot Super Sport Cup tires.

The interior and exterior of the Z06 package will continue the race-ready heritage, focused on aerodynamics and down force. The interior features a flat-bottomed steering wheel and magnesium GT seat or optional competition Sport seat. A removable roof panel will be the biggest change for the C7 Z06 over the C6 version. The exterior of the 2015 Chevrolet Corvette Z06 will come with a front splitter and spats around the front wheel openings will help allow air to flow efficiently through the Vette’s body. A carbon-fiber hood with a larger vent than the standard Stingray will allow the supercharged engine to breathe more efficiently. A rear spoiler from the Corvette Stingray’s Z51 Performance Package will be standard with the Z06 to help with down force. Front and rear brake-cooling ducts are functional on the Z06. Anticipate unique color schemes to be offered for the performance Corvettes (Z06 and Z07s).

Two additional exterior packages can be purchased on-top of the base, Z06 platform: The Carbon fiber Aero Package (CFAP) or Z07 exterior package. Starting with the CFAP, a carbon fiber front splitter, rocker panels, and larger rear spoiler that increases down force will be added to the Z06. The CFAP will have the option for the front splitter, rocker, and spoiler to be painted in black or a visible carbon-fiber finish. The second choice, the Z07 exterior package, will come with a front splitter that features larger winglets and an adjustable (see-through) center section on the rear spoiler for those who plan to race their Corvette. Both exterior options will significantly increase the Z06 Vette’s aerodynamics.

The Chevrolet Corvette Z06 was first offered as an option package in 1963. The current generation (C7) and last generation (C6) Z06s were developed in conjunction with the Corvette C7.R race car. Expect the 2015 Corvette Z06 to go on sale in early 2015. Check back often, we’ll have the pricing and performance numbers long before the car is for sale.