Fastest C7 in the World (video) 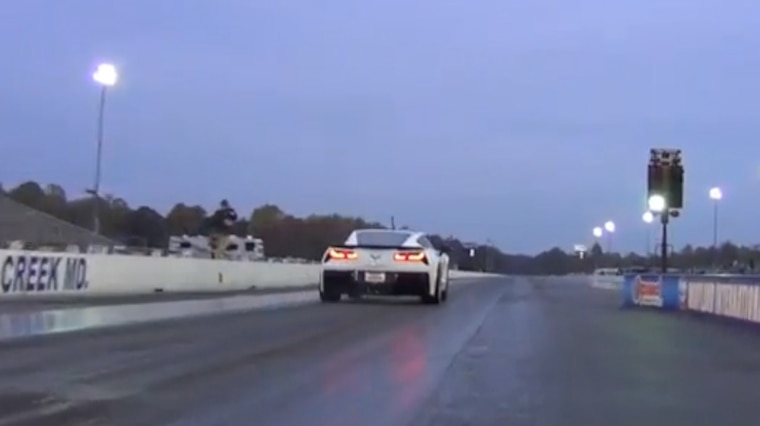 The minute the 2014 Chevrolet Corvette Stingray hit the streets the aftermarket was hard at work. Tuning software, long-tube headers, cold air intakes, and even camshafts were readily available in weeks. Well it is not surprising then that we’d already have some claims to the C7 record at the drag strip.

Race Proven Motorsports (New Castle, DE) is no stranger to GMHTP, as one of the most formidable shops in the Delaware Valley area, and owner of many Corvette records. The minute owner Fran Schatz got his hands on RPM’s newest addition it went right to the dyno. RPM’s 7-speed manual equipped C7 belted out 428 horsepower and 425 lb-ft of torque on the in-house Dynojet chassis dyno. Next stop: Cecil County Dragway. RPM took full advantage of the fall air, running 11.92 at 119mph bone stock. Despite the stock tires, the C7 managed to clock a 1.87 short-time and 7.78-seconds to the 1/8-mile.

Nitrous Outlet shipped out a plate kit to up the ante for the next track outing. After popping in the jets for a 100-horsepower dose of nitrous oxide, a custom tune was uploaded, and it was time to head back to the rollers. RPM didn’t want to reveal the dyno numbers just yet, but clearly the high compression LT1 loves nitrous – 11.44 at 129mph! A soft launch really limited the C7 to the 330-foot mark (running nearly the same as stock), but by the 1/8-mile it was really picking up steam.

Next American Racing Headers were sourced for a set of long-tubes, and a custom air intake was fabricated by RPM to help the C7 breath. Another dyno session helped dial in the tune even more, and then the crew bolted on a set of BFG drag radials before heading to Cecil for the record-setting 11.16 at 129mph pass. With only a 2.07 sixty-foot time, clearly there was more left in the C7.

1,100 miles south, Redline Motorsports in Deerfield Beach, FL was making a similar plot. Owner Howard Tanner had a 7-speed Z51 on order, and was quick to establish a baseline of his own. The details of this testing is under lock and key for the moment as sister publication VETTE magazine has the exclusive, however, they did release this teaser video.

For the first round of mods to what will eventually be Redline's Adrenaline Rush prototype vehicle, the Z51 has added Kooks long-tube headers, a Nitrous Outlet plate kit, custom tuning, Mickey Thompson 305mm drag radials, and CCW skinnies. With a soft 2.0 sixty-foot, Redline managed to top RPM's time just one day later at Palm Beach International Raceway, running 11.02 at 134mph, and take the record. On a later run, Tanner managed to squeak out a 1.73 short-time, but missed a shift that spoiled his chances of getting a 10-second timeslip.

Enter Late Model Racecraft out of Houston, Texas. These guys mean business. They build X275 and Outlaw Drag Radial cars, tear up the Texas Mile, and are responsible for some of the most notorious roll racing machines in Texas. After getting an early set of LT1 heads, LMR has been feverishly working on a proprietary CNC program, and has also been working with Comp Cams on multiple custom camshaft packages. After having tested a few different camshafts and variations on its head design, LMR made its first go at the C7 record with an automatic Stingray. A Reaper package, including ported heads and a camshaft, was complemented by American Racing long-tube headers, Circle D torque converter, Mickey Thompson 305/35/19 drag radials, a Nitrous Express plate kit, and (of course) custom tuning via HP Tuners. And the result – the first C7 in the 9s (11/8)!

This very same car also become the fastest naturally aspirated C7 earlier in the day, running 10.66 at 127mph before spraying the nitrous. Its previous outing was with an LMR tune only, and went 11.47 at 121mph.

Clearly the new LT1 and C7 chassis have lots of potential that is still left untapped. Just wait until boost comes into the equation. These are exciting times, and it is good to know that direct-injection is far from the end for aftermarket modifications. Rumor has it Lingenfelter, Vengeance Racing, and a few others have some dogs in the fight. Stay tuned as we continue to update you with the race for the fastest C7!