We take a sneak peek at the upcoming COPO Camaro, Z28, and SS sedan 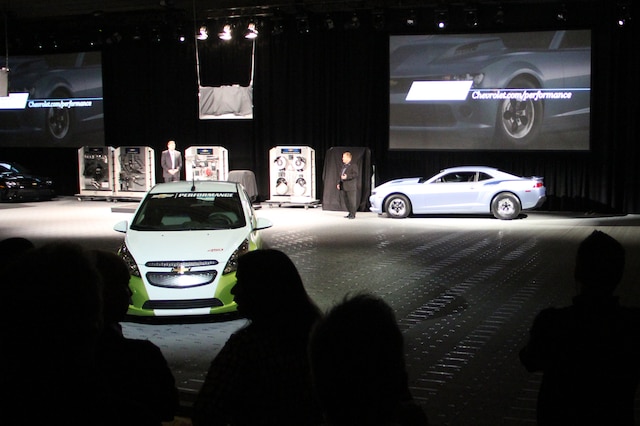 This week, we were invited to a media, invite-only event hosted by Chevrolet at SEMA in Las Vegas, Nevada. The event focused mainly on Chevy performance vehicles, ranging from the the drag-oriented 2014 Chevrolet Camaro COPO prototype to the all-new 2014 Chevrolet SS sedan. For the first time we had the opportunity to get up-close and personal with the 2014 Chevrolet Camaro Z/28, which you’ll read about below.

One of the biggest highlights of the evening was the 2014 Chevrolet Camaro COPO concept vehicle. The prototype brought to the event featured a 350ci topped with a 2.9L Whipple supercharger. A Fuel cell sat in the trunk, while a roll cage made the interior look and feel serious. This car is serious; it is 9-second, drag race-ready vehicle from the factory. Only 69 COPO ponycars will be built for the 2014 model year. Each will have either an optional naturally aspirated 427ci, supercharged 350ci with the 2.9L Whipple screw-type supercharger, naturally aspirated 350ci, or 396ci engine. New-for-2014, each 2014 Chevrolet Camaro COPO comes with improved racing seats and updated graphics. Additional options include wheels from Weld Racing and a carbon-fiber hood. The satin finish and decals on the prototype may look different than the actual production model, so don’t get your hopes up. All COPOs are guaranteed for NHRA Stock and Super Stock competition. The car comes in right around $95,000.

Next up, we drooled over the all-new 2014 Chevrolet Camaro Z/28. The legacy-inspired, track-ready Camaro has a 7.0L LS7 engine capable of 505hp; we just wish Chevrolet popped the hood for the event. The Engine will feature titanium intake valves and connecting rods, CNC-ported aluminum cylinder heads, and a forged-steel crankshaft. Expect the Z/28 to possess a tree-stump yanking 481lb-ft of torque. It was also noted that air-conditioning is available, but only as an option. We still have no price for the 2014 Chevrolet Camaro Z/28; you’ll be first to know when we find out.

Rounding out the evening was the much anticipated 2014 Chevrolet SS sedan. Chevrolet is bringing back its rear-wheel drive, V-8 platform once again, and this time with the help from Jeff Gordon. Inside and out, the SS is inspired by Gordon’s personality; Gordon was on hand for the evening to answer questions, take photos, and shake hands. It was an honor to be in the presence a NASCAR legend. Gordon helped to design and create the LS3 6.2L powered SS sedan, capable of 415hp and 415lb-ft of torque. The car keeps it classy with 20-inch black-chrome wheels, huge brakes, and a red satin finish. We say: “Sign us up for a test drive!”