For 25 years, the Sledgehammer was the world’s fastest street-driven car 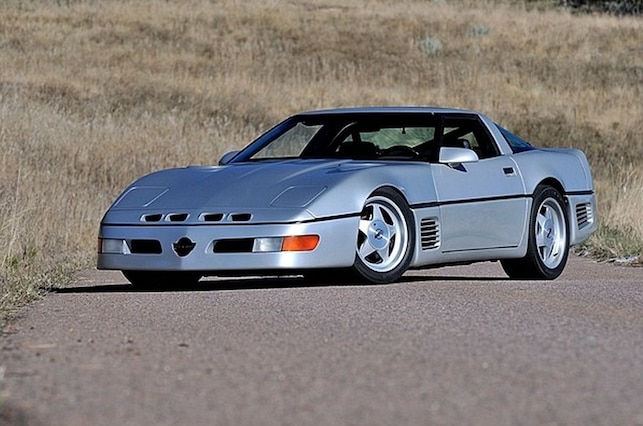 The weekend of January 17-26, 2014, at Silver Spurs Arena, Mecum will bring its collector car auction to Kissimmee, Florida. With it will be a 1988 Chevrolet Corvette Callaway Sledgehammer. The 1988 Callaway Corvette was built to exceed all existing top speed records and to showcase Callaway’s industry-leading engineering expertise, and that’s exactly what it did.

On October 26, 1988 John Lingenfelter drove the Callaway-built Corvette Sledgehammer, #88-051 to a top speed of 254.76 mph. The Sledgehammer remained the world's fastest street-driven car for 25 years making it the longest speed record holder.

Under its hood sat a traditional four-bolt main NASCAR-spec “bowtie,” 349.8ci small-block Chevy, hand-built by the Callaway staff. Callaway then added Mahle pistons on forged connecting rods and a surprisingly mild camshaft. A set of Brodix aluminum heads were paired to twin, Turbonetics T04b turbochargers, which were fed through another pair of relocated intercoolers. With high-temperatures from the turbos and sustained high-rpm inevitable, fueling the Corvette’s small-block was left to a set of Bosch fuel pumps to keep an adequate amount of fuel fed to the engine. All said and done, the combo was good for an almost unheard of 898 hp at 6,200 rpm with 772.2 lb-ft of torque at 5,250 rpm. A 6-speed manual transmission backs the engine, giving the driver an array of gears to shift.

Underneath the car, Carroll Smith helped to tune the Sledgehammer’s suspension. Built for high speed stability, the lower control arms had to be relocated. Also, reducing the car’s ride height by one inch was imperative to the aerodynamics. Koni shock absorbers were used in conjunction with 17-inch Dymag magnesium wheels wrapped in Goodyear tires developed for high speed runs.

With design and under hood real estate at a minimum, an extensive amount of research and design from Paul Deutschman, of Deutschman Design went into fitting the perfect setup into the available space. Deutschman also reshaped the bodywork to improve cooling to feed the turbos and intercoolers with plenty of air. These types of key element changes were necessary for the car to achieve its 250-plus mph top speed window.

On the inside, the car retained much of its stock configuration. Power windows and locks, Bose radio, electronic air conditioning, and power sport seats were all kept. Necessary race car modifications were added, such as a fire safety system, leather padded roll bar, 5-point harnesses, and gauges for monitoring what’s happening under the hood. Moreover, keeping in tune with Callaway’s original plans for retaining much of the cars stock design, the Corvette was driven from the Callaway headquarters in Old Lyme, Connecticut to the 7.5 mile oval track at the Transportation Research Center (TRC) in Ohio for its record run.

The 1988 Chevrolet Corvette Callaway Sledgehammer may be 25-years old, but it’s by no means outdated. The Corvette, at 3:45 p.m. on October 26, 1988, recorded a top speed of 254.8 mph. It established a new closed-course speed record, which lasted for 25 years. It could also clip from 0 to 60 in 3.9 seconds. On the quarter-mile track, the Corvette shakes an impressive 10.6 seconds. In 2013, the Sledgehammer was inducted into the Bloomington Gold Great Hall. The Hall recognizes 50 people and 50 Corvettes that significantly influenced the Corvette Phenomenon. This is most definitely a prestigious award considering the Corvette’s 65th anniversary this year. Stay tuned, we’ll be sure to bring you the sale price of this car once it crosses the block.

Don Herbal's 88 Callaway has avoided two dangerously near misses with fire to survive today as a tire shredding racer.

Check out this custom 1988 Chevrolet Corvette Convertible, brought to you by the experts at Corvette Fever Magazine.

Check out this 1988 Chevrolet Corvette Coupe, brought to you by the experts at Corvette Fever Magazine.

In this feature article VETTE profiles Laurie Schwab, for whom the Chevrolet Corvette is the fulfillment of a dream, a way of life - Vette Magazine