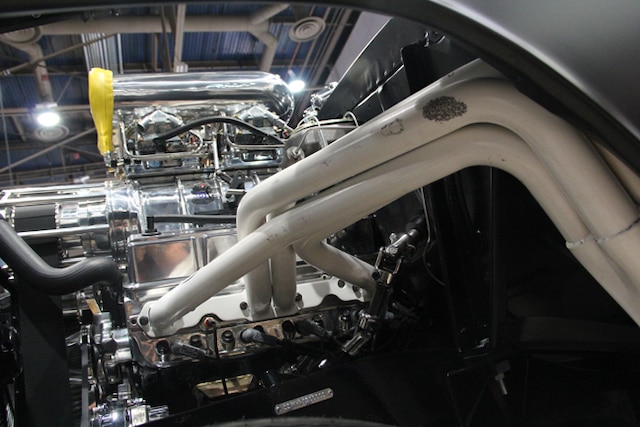 As huge Chevy fans (and more-so fans of Gassers) we thought it would be cool to relive one of the best cars we saw at the 2013 SEMA show: a 1955 Chevy owned by Thomas Munger of Alto, Michigan. Working in the tool industry, Munger knows his way around cars and wanted a nice cruiser. This car was built from the ground-up and features loads of new goodies. Weighing in at 3,700lbs, this ’55 Gasser has more than enough power to take it down the track.

In classic fashion, Munger’s 1955 Chevy Gasser has a small-block Chevy 350-inch engine bored 0.060-inch over making it 383-inches. Poking out from the hood are a pair of Holley 850cfm dual-carbs that feed a BDS supercharger. Aluminum heads house a set of Crane Cams, while a Griffin 4-core keeps the whole engine cool. The small-block churns 465hp that passes through an automatic TH350 transmission. A set of Pypes Performance exhaust helps expel the fumes behind the car. The whole setup runs 93-octane, pump gas for the street.

What stopped us in our tracks was how clean the Gasser looked. After inquiring further, we learned the entire chassis, including the body work, was done by Woody’s Hot Rodz. Coming complete as a roller, this Gasser can be purchased by anyone as part of a new design being showcased at SEMA. The Chassis comes with Wilwood 2-piston caliper brakes upfront, and Wilwood drums outback. The rearend is a John’s Industries Ford 9-inch with 3:70:1 gears and Ford 31-spline axles. The car cruises on Torque Thrust D’s on all four corners, wrapped in Firestone tires.

As we stated above, the bodywork is stock with the Woody’s Hot Rodz rolling gasser chassis. The interior is all-aluminum with an American Autowire harness, and a stock gas tank. All-in-all, we’re super stoked to have had the opportunity to crawl all over this car. It’s nice to see a vintage look like the Gasser still being celebrated in the 21st century.