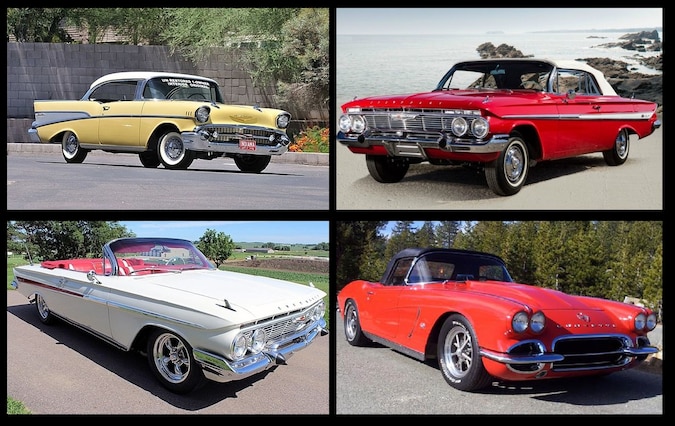 When thinking of the perfect automotive heist, our minds dream about a wild ride like “Gone in 60 seconds.” Stealing a Ferrari, Porsche, and the ultra-rare Eleanor Mustang, and then storing them in a warehouse. No where do we imagine stealing Chevrolets, but that’s not to say they aren’t worth stealing. If anything, they’re probably too easy to snag; Chevys have been produced in large quantities for decades, the parts are easy to remove and distribute. That must have been the exact train of thought a couple weekends ago when a thief, likely more than one, stole four Chevrolets in and near the Monterey auctions in Northern California.

The first car reported as stolen was a 1961 Impala. The car is supposedly the only all-correct, matching numbers SS 409 ci convertible known to exist. The car had recently gone through a frame-off, rotisserie restoration and was valued at $220,000. The car was taken around 8:45 pm from a secured lot after crossing the auction stage where it did not meet its undisclosed reserve price.

The next day, Saturday, August 17th, 2013, a 1961 Chevrolet Impala was heisted from the Del Monte golf course. The car was consigned for the Mecum Monterey auction. It sported a modified 383 ci engine, harnessed by a TCI TH400 transmission. The interior and exterior were brand new, valuing the car at more than its highest bid of $50,000 (which didn’t meet the reserve price.)

The third Chevy stolen from the Monterey auction was on Sunday morning, the Pale Yellow 1957 Bel Air was a one-owner car worth $65,000. The Bel Air was all original and had been in storage for 42 years before being uncovered for the auction. Another tidbit, the Bel Air was previously part of the Richard Hubbard Collection and was being offered for sale by Sam Pierce Chevrolet in Muncie, Indiana.

The final Chevy stolen on the weekend of August 17-18th was a 1962 Corvette. The owner was eating at a bed and breakfast near the Monterey Auction when the car was lifted 20-feet from patrons of the establishment. The couple, who’d owned the car for 20 years, were in town attending the Rolex Motorsports Re-union.

So far, none of the four cars have been returned. One happy weekend of heritage car festivities has turned into a remarkably devastating loss for four car owners. If you have any information about the cars in this story, please contact the Monterey office of the California Highway Patrol at 831-796-2100. Hopefully, with the help of fellow car enthusiasts, these cars will be cruising again with their rightful owners.