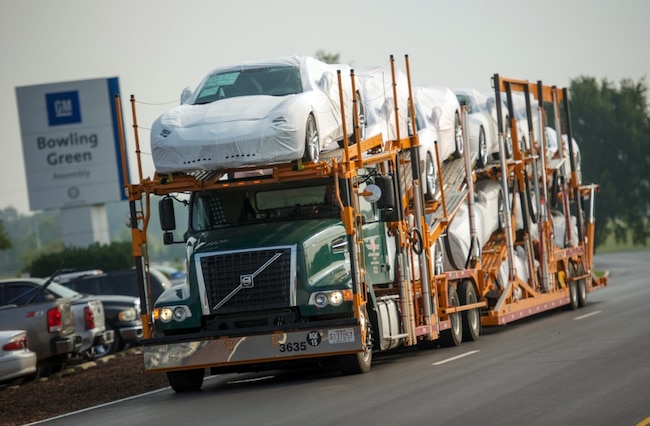 As of today, GM has begun shipping out the 2014 Corvette Stingray from the Bowling Green Assembly plant, where the Corvette has been built exclusively since June 1981. Approximately 1,000 C7s will arrive at dealers within the next few weeks, some of which may be out of build sequence to expedite the delivery.

“It’s an amazing sight to see the transporters filled with Stingrays heading to customers in all corners of the country,” said Dave Tatman, plant manager of General Motors’ Bowling Green Assembly plant. “The pride at Bowling Green is overwhelming and it shows in the tremendous quality and attention to detail going into each one of these new Corvettes.”

$131 million was invested in upgrading the Bowling Green plant in order to produce the C7; $52 million alone was needed in order to produce the aluminum frame in-house for the first time. The redesigned frame is literally the backbone of the 2014 Corvette Stingray, which boasts a 99-pound weight reduction with a 57% increase in stiffness over the C6’s hydroformed steel frame. The transverse leaf spring based independent suspension is capable of 1.03g in cornering grip, and with the standard Brembo brakes it also stops in a scant 107-feet from 60mph.

Of course the much-publicized Gen V small-block V-8 dubbed (once again) “LT1” provides the foundation for the Stingray’s accelerative performance. The LT1 produces an SAE-certified 455 horsepower and 460 lb-ft of torque, with an additional 5hp and 5 lb-ft using the available performance exhaust. This highly efficient direct injection, variable valve timing pushrod engine achieves an EPA-estimated 17mpg (city) to 29mpg (highway) worth of fuel mileage while also being capable of 3.8-second 0-60 and 12.0 at 119mph quarter-mile blasts (with the Z51 model).

Base price for the 2014 Corvette Stingray is $51,995 including destination, and the Convertible, which kicks off production later in the year, will start at $56,995.