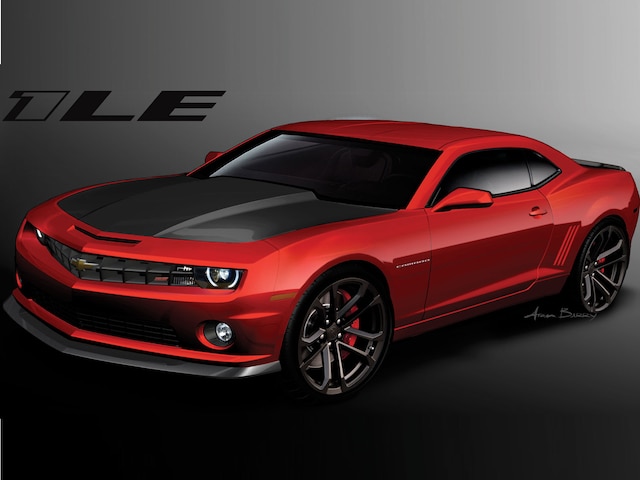 Letter of the Month

Just a thought for you to consider: We gearheads all love the big cubic-inch motors and the high horsepower they crank. Nothing compares to the rumble of a built 572 cranking up. However, it would be just as fun for some features on high-revving small displacement V-8s too. Maybe a how-to on a de-stroked 350 block down to 302 that revs to 8,500 happily, which is reminiscent of a DZ 302. Maybe some features on ponycars built to Pro Touring standards with small displacement motors. Love your mag!

Hmm, small displacement with the ability to rev to the moon? Yes, we love it! Anyone else want to see this? Email us at chevyhi@sorc.com and let us know.

The road-racing inspired Camaro 1LE performance package returns for 2013 with unique gearing, suspension tuning, and tires that make the model capable of more than 1 g of lateral acceleration and a sub-3-minute lap time at Virginia International Raceway’s (VIR) Grand Course. It is offered on Camaro SS coupes with manual transmissions.

“The Camaro 1LE combines the best elements of the SS and ZL1 to take road-racing performance to a whole new level,” Al Oppenheiser, Camaro chief engineer, says. “That the 1LE breaks the 3-minute lap at VIR puts it in the upper echelon of performance cars. That it starts under $40,000 makes the Camaro 1LE one of the most affordable, most capable track-day cars offered by any manufacturer.”

In anticipation of consumers entering the 1LE in amateur-racing events, Chevrolet is pursuing SCCA approval of the 1LE package for Touring Class competition.

For 2013, all Camaro SS models, including the 1LE, will feature standard variable-effort electric power steering and an available dual-mode exhaust system. Both features were introduced on the ZL1. Additionally, ’13 Camaro LT, SS, and ZL1 models are available with Chevrolet’s color touch radio with MyLink infotainment system.

“With the 2013 model year, Camaro offers something for almost every driver, including the 323hp, 30-mpg 2LS; the all-new, 580hp supercharged ZL1 convertible; the COPO Camaro for drag racing; and the new 1LE for amateur track days,” John Fitzpatrick, Camaro’s marketing manager, says. “We expect the range of choices and enhancements for 2013 will help Camaro remain America’s most-popular sports car.”

Camaro sales were up nearly 20 percent for the first two months of the year, building on an 8.5 percent gain for all of 2011. The 1LE package goes on sale this fall with the 2013 Camaro line. Pricing will be released later this year.

A Heritage of Handling

The Camaro 1LE package was introduced in 1988, inspired by Camaro’s involvement in Pro-Am road racing.

The 1LE also features exclusive, mono-tube rear dampers instead of the twin-tube dampers on SS models. The new hardware allowed engineers to tune the 1LE suspension to focus on optimal body motion control while preserving much of the ride quality and wheel-motion control of the Camaro SS.

Visually, the 1LE package for 2013 is distinguished by its matte black hood, front splitter, and rear spoiler, as well as the 10-spoke ZL1-based wheels, which are finished in black. The functional front splitter and rear spoiler contribute to the car’s on-track performance by helping reduce aerodynamic lift at high speeds.

All ’13 Camaro SS models, including the 1LE, will benefit from performance technologies that debuted on the 580hp Camaro ZL1.

The improvements began in 2012, when all SS coupes incorporated the ZL1-derived chassis element: Stabilizer bars with drop links repositioned outboard of the control arms. This made the stabilizer bars four times more effective than in previous models, for improved control of body roll and crisper response to steering input.

New for 2013, the electric power steering system developed for the ZL1 will be standard on all ’13 SS models. The variable ratio, variable effort system provides light efforts for easy maneuverability at parking lot speeds, as well as increased resistance at higher speeds. This provides more feedback and a more direct steering feel to the driver.

Also new for 2013 is an available dual-mode exhaust system, available on Camaro SS models with the LS3 V-8 engine and six-speed manual transmissions. Similar to the systems found on the ZL1 and Corvette models, this vacuum-actuated system provides a quieter driving experience at low engine speeds and a more aggressive sound at high engine speeds.

Other changes to optimize the 1LE for track-day use:

Our inaugural Chevy High Performance Nationals is just around the corner—will you be there? If this is news to you, then head over to CHPnationals.com, where you can see the detailed list of heads-up drag racing classes. This is also one of the stops for the LSX Challenge Series!

There’s more: You can also expect to see side-by-side doorslammer action, jet cars, the latest Pro Touring cars duking it out on the autocross, including a giant manufacturers’ midway. There’s something for everyone, so be sure to save the weekend of June 1 and head out to Atlanta Dragway in Commerce, Georgia!

Chevrolet’s color touch radio with MyLink infotainment is available on all ’13 Camaro LT, SS, and ZL1 models. The color touch radio, with a 7-inch touch screen, also can be paired with an available in-dash GPS navigation system—a first for the Camaro.

The color touch radio with MyLink gives customers a higher level of in-vehicle wireless connectivity and customized infotainment options, while building on the safety and security of OnStar. It seamlessly integrates online services, such as Pandora Internet radio and Stitcher SmartRadio, using hands-free voice and touch-screen controls via Bluetooth-enabled phones.

Founded in 1911 in Detroit, Chevrolet is now one of the world’s largest car brands, doing business in more than 140 countries and selling more than 4 million cars and trucks per year. Chevrolet provides customers with fuel-efficient vehicles that feature spirited performance, expressive design, and high quality. More information on Chevrolet models can be found at www.chevrolet.com. CHP