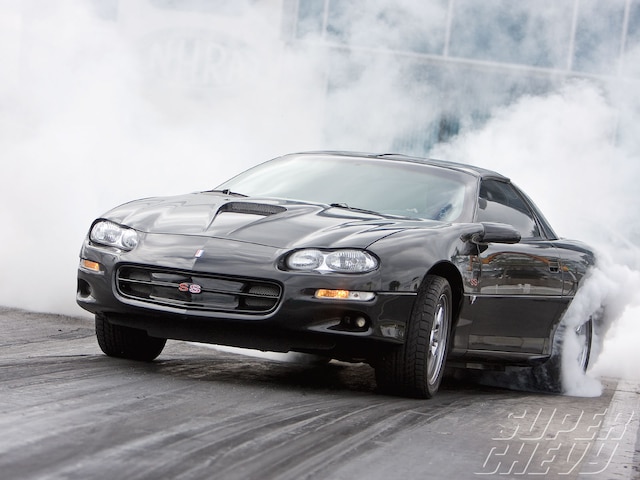 Hot rodders have been searching for stickier street tires since Louis Chevrolet squeezed a blown LS9 his Type C Classic Six in 1913. From day one, engine technology has outpaced tire technology and the game has always been to get a starting line advantage over the guy in the next lane.

Cheater slicks were the way to go in the '50s, while in the '60s, horsepower-addicted muscle car owners swapped on Atlas Bucrons to aid traction. Pretty soon, savvy tire manufacturers were in the business of building dedicated street/strip tires. One of the first (and to this day most successful) was the Mickey Thompson ET Street. Essentially, it was a slick with a couple of grooves carved into the face. The ET Streetworks great on the strip, but as a true street tire it leaves something to be desired if you like to carve corners or drive in the rain.

Then about 20 years ago, BFGoodrich shook things up when it introduced the drag radial. This was a DOT tire that you could actually use on a daily basis, then drive to your favorite drag strip, run low e.t.'s, and motor on home without the hassle of a tire change. It wasn't long before other companies jumped into the drag radial arena, with Nitto Tire and Mickey Thompson being two of the most active. It's been a huge battle ever since, with drag radial-specific classes being created by every sanctioning body that caters to real street machines.

Mickey Thompson offers both its ET Street Radial (with sizes between 235/60R15 and 275/40R17) and its ET Street Radial II, which the company describes as being "optimized for the modern sports cars and sport compacts." It offers this puppy in a wide range of fitments, from P205/50R14 to 305/45R18s.

Nitto's Extreme NT555R has been the company's offering in this category since mid-'90s and that's a long time in this business. It's still an excellent tire for the weekend drag racer, but for serious competition the company decided a new tire was necessary.

Enter the NT05R. It's got a far more aggressive tread pattern, a specialized race compound and large contact patch. It is DOT-approved, but is designed for the serious drag racer. Nitto has aimed the NT05R squarely at the modern muscle car market, including late-model Camaros and Corvettes. It ranges in size from 275/40R17 all they was up to 31535R20, with five other sizes in between.

We were able to procure an early production set of Nitto's NT05R in the size of 275/40R17 and went in search of a suitable car to test them on. The guys at sister publication GM High-Tech Performance recommended Tommy Herrschaft and his hard-charging '99 Camaro SS and he eagerly volunteered. For street tires, he uses MT ET Street Radial IIs, size 315/35R17, and was interested to see if his track times could be improved by switching brands. Suddenly, we had a tire shootout on our hands. We booked the mega-sticky Gainesville Raceway strip in Florida for some gear-jamming fun.

You'd never know by its show-quality appearance inside and out, but this fourth-gen runs like a madman. It has an LS3-based 416 ci engine for motivation and runs high-10s and low 11s au naturale and 9.80s at over 140 on nitrous. Best of all, it's got a T56 manual trans, which we thought would be better for testing the hard-launching capabilities of the tires. With Mickey Thompson 28x10 slicks, Tommy's SS has run a best of 10.78 at 128 on motor.

For our track day, we baselined the car with Tommy's street tires, the ET Street Radial IIs, before switching over to the Nittos. Our first concern was that the size differential between the Mickeys and the Nittos, which on paper gave the former a measurable width advantage. Also, the Nittos were brand new so we figured they'd need a little break-in at the strip before performing at an optimal level. Helping in our efforts on this day was Justin Nelson of J&J Performance in Cape Corral, Florida, who did the tune on the Camaro.

When we switched to the Nittos, we had a bit of a learning curve and the first pass was a tire-spinning mess. We started with 20 psi in the tires and a medium length burnout and got an 11.627 at 127.90 (3,800 rpm launch). Justin dropped the tire pressure for the next pass to 17 psi and the result was nearly identical.

After a brief cool-down, we dropped the air pressure to 15 psi and the launch rpm to 3,500. Tommy also did a longer burnout. We were rewarded with an 11.139 at 128.07, equaling the best elapsed time of the Mickey Thompsons, though the short time was still off, at 1.844.