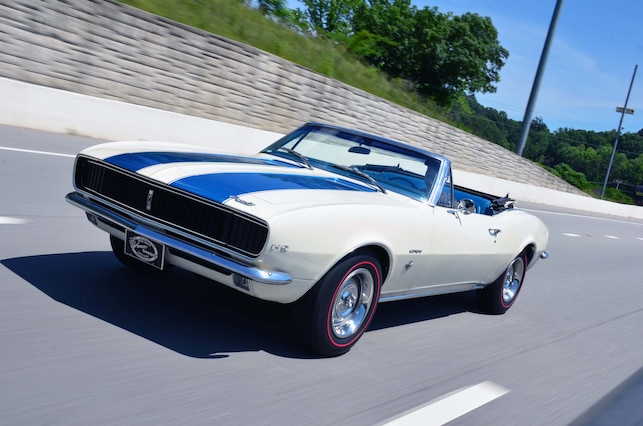 Let's face it: We're spoiled. Back when our muscle cars were new cars roaming the byways of America, we were he-men who figured that things like manual steering, manual brakes, and, yes, bias-ply tires were the best things going. Fast-forward 40 years and take into account the real-world wisdom that has accumulated (like our gray hair) over that time, and we have become accustomed to power accessories and better tires. Namely, radial tires.

According to our buddy Tommy Lee Byrd, who gets to do cool stuff for us media guys at Coker Tire in Chattanooga, Tennessee, radials are not as new as we think. Michelin had them for European sports cars soon after World War II. The difference between the two tire types is based on internal construction. A bias-ply tire uses multiple layers of rubber, some fused with materials like rayon or fiberglass, carefully molded together to form an interdependent tire face (or crown) and sidewall. Beneficial for heavy loading, these plies run at a crosshatching 30- to 45-degree angle to the tread centerline.

On a radial design the sidewall and crown are not integral; rather, a belt of steel runs around the crown area, allowing for a stiffer sidewall and wider tire face. Corky Coker believes his latest product release, a newly designed line of Firestone Wide Oval and Super Sport redline radial tires, is where muscle car-era tires would have gone if things like emissions controls had not taken center stage at the start of the 1970s. Hey, better later than never, and frankly better than ever.

For a lot of guys who enjoy driving vintage iron, there are a number of excellent modern radial options available. But for those muscle car owners who want to maintain their car's vintage identity right down to where the rubber meets the road, until recently the only (safe) option was to roll on reproductions of original bias-ply designs, among them Coker's still-available line of authentic Firestone models. At the start of 2017, Coker announced this release, and we went down to Chattanooga to run one of the very first sets on Corky's own 1967 RS Camaro.

Tommy Lee was on hand, and it would be the first time he had driven on the tires as well. The car is a 327ci four-speed convertible, an older restoration with a fresh motor and new brake lines, attractive with blue stripes and matching blue interior. Our May afternoon was a pretty spring day, with temperatures in the mid-80s, and we started out with a set of OE-style D70-14 tires that were correct for this model. I was going to be the designated driver, but after finding that the car's Saginaw tranny and associated shifter were not going to cooperate, I convinced Tommy Lee to pilot while I took photos. Besides, I had driven enough restored bias-ply big-blocks that I already knew what they would feel like.

We made a run of about 15 miles on the original tires to a burger joint in the town of Red Bank, which gave us a couple of highway blasts, some in-town action, and some cornering. The bias-ply design could find highway cracks to track with, and steering was a little more point-and-feel than what more modern construction allows for. This car does have manual steering and front disc brakes. The impression was, well, typical.

"From the driver's seat it felt like the original-style bias-ply tires accentuated the car's aged suspension and steering system," Tommy Lee noted. "It wasn't dangerous or scary, but keeping the car between the lines at highway speeds required a bit more effort than your average daily driver."

As we looked at the designs in the Coker showroom, Tommy Lee pointed out the hard edge of the crown on the OE-correct bias-ply Wide Oval. This was actually designed into the tire back then, perhaps to let the hard edge "profile" better. This may also be part of the reason the bias-ply tires walk in pavement cracks. The biggest exterior change on the new Coker Tire design is that this ridgeline is gone. The series uses the letter R in the size coding; the set we would put on the Camaro were FR70-15. Due to recent changes in DOT laws, these tires (and all new tires) require a DOT number cast into the front and rear faces near the bead edge.

The benefits of radial tire designs are that they offer better road-to-tire contact, run cooler when driven longer distances, offer longer tire life, and overall feature stronger construction. Coker also had a fresh set of new GM-design Rally wheels with trim rings and center caps to mount the new tires on. Of course, stepping from the D70-14 to an F70-15 (actually FR70-15) did not make for a completely unbiased test (couldn't resist, sorry). We would be increasing the diameter as well as the tread width. However, it would be the first time for either of us on the new rubber.

This time we stayed off the interstates to begin with; instead, we started a climb up historic U.S. 41 toward Lookout Mountain, the legendary Chattanooga Civil War landmark and a great place to get the tires on a combination of curves and straight pavement. Tommy Lee fired it up, and we headed south.

The first thing we noticed was that the car rode quieter. Even in the passenger seat I could feel the difference in how the car was going through the corners. It was firmer.

"We've had a hard time keeping these tires on the shelf, so I was excited to finally try them for myself," Tommy Lee said. "I've driven old cars on bias-ply and radial tires, so I knew what sort of changes to expect. The difference in ride quality was more than anticipated, and I just wanted to keep driving it to see if I could find a weak spot with the new radials."

We climbed up a notable road grade, turning off in a little park to get a couple of beauty shots. Whether bias-ply or radial, that set of fresh rims and tires really woke up this car's curbside appearance.

Again, the benefits of Coker Tire's full-service offering of both the rubber and the hardware was a big improvement over shopping these components from different sources. If you buy the tires, they come wrapped in a secure plastic covering. If you order them with the wheels, Coker Tire will mount and balance them at no charge.

We then headed out to Highway 27 and took a jaunt north at highway speeds for a few more images. The larger tire size filled the wheelwells much better than the prior examples had, but Tommy Lee's impression of cruising in traffic was a bit different than the earlier trip for lunch.

"With the new Wide Oval Radials, the car's handling characteristics changed drastically on curvy roads. Once we got onto the highway and reached about 65 miles per hour, the new radial tires made this feel like a completely different car. The stability, handling, and reduced road noise are noticeable the moment you hit the road."

The MSRP retail price is stated between $230 and $325 per tire, and they look correct to the era of your classic muscle car. As we noted, you can get nice modern rubber from other manufacturers, but by letting you fully enjoy driving a restoration with correct-appearing Firestone tires once again shows that Coker Tire has its finger on the pulse of today's collector car hobby.

001-coker-tire-comparo-1967-chevrolet-camaro-driving-action
1 Out on the highway the new tires really show their stuff. Corky Coker's 1967 Camaro RS drop-top was styling, too, with a fresh motor, lightly tuned suspension, and OE-appearing Firestone Wide Oval radials.

002-coker-tire-comparo-sidewall-marking
2 Here is the subtle visual difference in the markings on the new tires. In place of "F70-15," the design reads "FR70-15," with "radial" below it. On the redline designs, the redline was raised rather than left carved into the sidewall in the interest of sidewall strength.

003-coker-tire-comparo-bias-ply-crown-edge
(NOTE TO TOM: please rotate so horizon is flat)
3 This hard edge to the crown on the standard (and period-correct) Firestone Wide Oval bias-ply design was created back in the 1960s and may have influenced why the tires seem to follow pavement creases at highway speeds. This was the set of D70-14s we started our day on.

005-coker-tire-comparo-mounting-tires
5 In Coker Tire's garage, Keith Brown made quick work of getting four fresh wheels and tires ready for our Camaro's road test. Coker Tire offers free mounting and balancing if you purchase tires and wheels together.

006-coker-tire-comparo-new-tire-wrapped-for-shipment
6 If purchased new simply as replacements, the tires are shipped tightly wrapped in plastic to protect the surface and graphics.

007-coker-tire-comparo-stunkard-byrd-on-road
(needs credit)
Marty McHugh photo
7 Stunkard (right) and Tommy Lee Byrd discuss how the bias-ply tires work during a trip for lunch. Our tests entailed driving in a variety of conditions.

008-coker-tire-comparo-cornering-on-wide-oval-radial
8 One benefit of a radial versus a similar bias-ply is the way the internal steel belting on the tread face allows more of the radial tire's footprint on the pavement. Here the car crests a grade and shows the amount of tread surface on the road.

009-coker-tire-comparo-driving-action-tire-close-up
9 If you are used to driving on the bias-ply tires that are commonplace in the hobby, you will certainly notice big differences in handling quality and road noise when you switch to the Wide Oval radials. The radial design also extends tread life.

010-coker-tire-comparo-1967-chevrolet-camaro-on-lift
10 There is something unusual about Corky Coker's 1967 Camaro. Can you spot it? (If you like gen-one models, you will probably get it right away.) Answer: The car, an older restoration, has 1968 quarter-panels and marker lights.