Newsletter
Sign Up today for our FREE Newsletter and get the latest articles and news delivered right to your inbox.
Home
Camaro Performers
How To
Wheels Tires 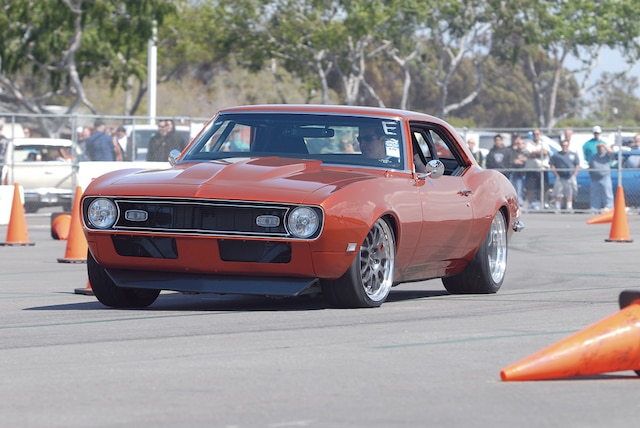 We don’t even want to know where they came up with the phrase “There’s more than one way to skin a cat,” especially if it’s accurate. Nonetheless, there’s generally one correct way to do a particular task when dealing with performance parts. Shortcuts taken during an installation can come back to haunt you down the line, and the time you saved by cutting corners will simply evaporate when you have to do the whole deal over again.

We got schooled in this life lesson when we took our ’68 project car, Bad Penny, over to Currie Enterprises to install the aluminum center section we built a few issues ago (Gears Of War, July ’08). We discovered—during what we thought was going to be a routine swap—installing a part is as important as how a part is actually built. Some of the issues comprised of choosing better parts while others involved outright mistakes we had made. Hey, we never claimed to be perfect, but at least this way we all get to learn from our errors.

We were also plagued with leaky axle seals. Even after replacing the seals they would start to seep after a short time. Nothing is more embarrassing than a nice car that leaks fluid all over the place.Currie diagnosed the leaky axle seal as being the result of the axle not being held firmly in place. The axle bearing retainer plates provided with our brake kit are just stamped steel, under the stress of the car being pushed hard laterally they were flexing and letting fluid though. The fix came in the form of these laser-cut ¼-inch thick plates from Currie (PN CE-9005TW, $12.95 each). As you can see, they are a lot stronger than what we were running and have no chance of deforming.

Currie diagnosed the leaky axle seal as being the result of the axle not being held firmly in place. The axle bearing retainer plates provided with our brake kit are just stamped steel, under the stress of the car being pushed hard laterally they were flexing and letting fluid though. The fix came in the form of these laser-cut ¼-inch thick plates from Currie (PN CE-9005TW, $12.95 each). As you can see, they are a lot stronger than what we were running and have no chance of deforming.


The only downside to the Currie parts is, unlike the stamped steel version, they have to be installed before the bearings are pressed on. Sure, you could slot them, like the other ones, so they can slide over the axle, but you would be giving up a lot of their improved strength. Besides, Currie feels that having even pressure around the entire circumference of the axle seal is critical for staying leak-free.

We also discovered another part of our problem was that our left axle was just a touch too long and was rubbing on the center section. This explained why the car was hard to push when first built and was also causing the axle to push outward and flex the axle bearing retention plate, thus exacerbating our leak. Currie took some measurements and then milled a bit off the end of the axle. One more problem fixed.

The thicker retention plates meant that our old bolts were too short. Besides, we were using general, grade-5 bolts from our local hardware store—not the right stuff. Currie suggested the grade-8 T-bolts (on the right, PN CE-2012, $1.50 each including the nut). They were long enough to accommodate the thicker plates, stronger, and we wouldn’t have to grind one side down to clear the axle tube.


Another probable culprit in regards to our leaks was our venting system. The housing was fitted with a 6-AN fitting and we had drilled and tapped a cap to accept an 1/8-pipe pop-valve. Currie felt this wasn’t allowing air to enter and escape the rear at a quick enough rate, this caused an increase in pressure within the housing under aggressive driving, which only made the leaks even worse. Their suggestion was the cap-style breather vent (PN CE-9028, $4.95) on the right. It will flow plenty of air, even under hard, heat generating, driving.


With the axle seal leaks addressed it was time to figure out why our center section always leaked. We found out our housing was warped and not close to flat. We’re sure it came to us in the right shape, but it must have warped a bit when we welded on the brackets for the three link system. This in turn kept the housing from sitting flush with the old center section. With our new aluminum case the problem would have been even worse. To fix this Currie removed the studs and used a large hammer to persuade the case back into shape. After working over the flange with a flat file we were back in business. The moral of this story is to check your housing and make sure it’s square before installing a center section, especially if you’ve welded on it.


Another spot for potential leaks is around the bolts holding the center section in place. On the old unit we had just used nuts and lock washers, but Currie feels this isn’t the best way to secure the third member. They recommend Nylock nuts, which will never loosen up, with aluminum crush washers to further guard against leaks. Currie sells the nuts, washers, and gasket in one convenient kit (PN CE-9007 $6.95).


Running the right fluid is also critical for keeping your rearend assembly working trouble free. Currie suggest a non-synthetic heavyweight 85/140 gear oil and they also advise that the gear be broken in by raising the rear on jackstands, running the car for 10 minutes, letting it cool for an hour, then take the car for a 10 minute cruise and let it cool again. After that you should be good to go.


The new aluminum centersection looks great, but more importantly it’s been installed the right way. The changes made to the axle seal parts and fixing other problems should pay large dividends down the road with better performance and leak-free operation.