Newsletter
Sign Up today for our FREE Newsletter and get the latest articles and news delivered right to your inbox.
Home
Vette
How To
Wheels Tires

No turning back on alloy wheels 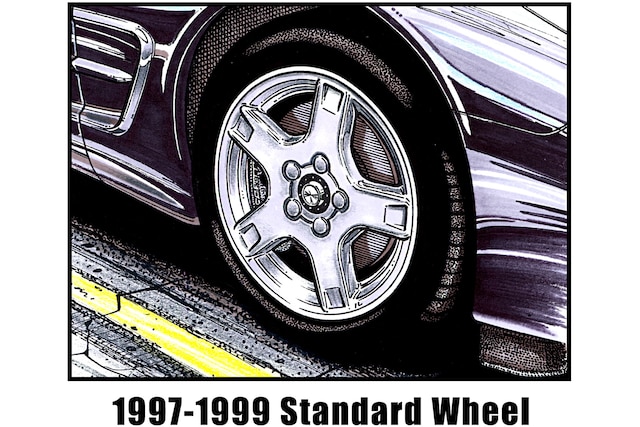 When it comes to sports car applications, unsprung weight is a factor in suspension performance. Unsprung weight includes tires, wheels, and suspension members. Everything that rides on the chassis structure is sprung weight. Less unsprung weight means that the suspension can be better controlled. As steel Rally Wheels and steel-belted tires got larger and heavier beginning in 1969, optional aluminum wheels were a must.

For those wanting less unsprung weight, RPO YJ8 Cast Aluminum Wheels ($175) were on the 1973 option sheet. But just like the C2 cast-aluminum knock-off wheels, early eight-slot aluminum wheels had the same problems as before: porosity and air leakage. The problems weren't solved until 1976. By 1978, steel-belted 255/60R15 tires on steel Rally Wheels were the heaviest of all of the wheel/tire combos on C3s. Except for the 1994-'95 ZR-1, the 1996 Grand Sport, and the Collector Edition; C4s used fan-blade alloy wheels that pulled air from behind each wheel to help keep the brakes cool.

There are three methods for making aluminum-alloy wheels. Forging molds and shapes a solid piece of aluminum-alloy using force and compression. Rolled forging takes hot aluminum-alloy and uses rollers to force the metal into the thickness and shape needed. Both forging methods are used to make performance wheels. Suction casting pulls in the molten alloy to better fill the molds. This method gives designers freedom to create intricate designs. This is why the number of wheel options has grown since 2009.

Nothing changes the personality of a car like wheels. With an enormous selection of wheels and finishes to choose from—plus stripe, color, and trim combinations-customers can trick out their Corvette to their liking. The days of hubcap-only wheels are long gone. As we enter into the era of the ber high-tech C8 Corvette and its likely performance models, it will be fun watching what Corvette designers come up with. This is the dawning of the tech-age of the C8. Vette

From 1997-'99, Corvette coupe, convertible and hardtop models used the same silver-painted alloy wheels measuring 17x8.5 front and 18x9.5 rear. There are chrome aftermarket versions. Many in the Corvette community thought the design was just OK and opted for newer C5 or aftermarket wheels.

The bargain-priced Z06 was a total Corvette game-changer. Aside from the improved suspension, the 385-405 horsepower and stiffer structure, the Z06's wheels are 1-inch wider front and back. The front wheels are 17x9.5 and the rear wheels are 18x10.5. The tires measured 265/40ZR17 on the front and 295/35ZR18 on the rear. Z06 customers appreciated the extra grip.

Optional wheels started to populate the Corvette catalog. The forged five-spoke wheel was available polished ($1,295) or chromed ($1,850). Wheel and tire sizes were the same as the standard Corvettes. Approximately 23 percent of all '08 Corvettes had these optional wheels.

Base model 2008-'10 Corvettes came with this split-spoke design, available in painted Sparkle Silver or optional Competition Gray ($395). Only 1,781 Competition Gray optional wheels were ordered. Sizes were the same as standard Corvette wheels.

These 15-spoke Polished Aluminum wheels could be found in the 2008 Corvette accessories brochure. The design was inspired by the wheels used on the successful Corvette Racing team's C6.R race cars. The sizes were the same as the standard 2008-'13 wheel, and were not available on the Z06. New, the front wheels cost $625 each and the rear wheels cost $715 each, for a total of $2,680.

The supercharged ZR1 was more than a Z06 with an extra 133 horsepower delivered by its supercharged, 638-horsepower LS9. The ground effects, suspension, brakes, wheels and tires were designed to complement one another into an outstanding Grand Touring (GT) Corvette. The wheels were 19x10 on the front shod with 285/30ZR19 Michelin Pilot Sport PS2 ZP tires and on the rear were 20x12 wheels shod with 335/25ZR20 PS2s. Standard ZR1 wheels were painted Sterling Silver. The chrome versions cost $2,000.

The Grand Sport coupes and convertibles were the best-selling Corvettes from 2010-'13. The wheel design was unique, but the size of the wheels and tires were the same as the Z06. Three finishes were available: standard silver painted, optional gray painted ($395) and chrome finished ($1,995).

Once again, base model Corvettes got new wheels. The slim, five-spoke design was the same size as previous base model Corvettes and was available as standard silver painted, painted Competition Gray ($395), Machine Faced ($895) and Chrome Aluminum ($1,850). You don't see many of these wheels because Grand Sports accounted for the lion's share of Corvette sales from 2010-'13.

The Z51 split five-spoke wheels were 1-inch larger in diameter front and rear: 19x8.5 front and 20x10 on the rear. The Michelin Pilot Super Sport run-flat tires were the same width as the stock Corvette, but had a slightly shorter aspect ratio: 245/35R19 front and 285/30R20 rear. The standard Z51 wheels were painted silver and there were two optional versions: black painted ($495) and chrome ($1,995).

The Z06 tradition of "more of everything" was established. The basic Z06 rides on 19x10 front wheels and 20x12 rear wheels and are shod with Michelin Pilot Super Sport ZP Summer Only tires measuring 285/35ZR19 on the front and 335/25ZR20 on the rear. Wheel finishes included the standard painted Pearl Nickel and optional painted black ($495), painted Spectra Gray ($595) and chrome ($1,995).

You don't see many Genuine Corvette Accessory wheels on C7 Corvettes because they are very expensive and make the factory optional wheels look like a bargain. The Motorsports wheel was available polished and painted black. A full set of 19-inch front and 20-inch rear polished Motorsport wheels went for $3,300 and the painted black set went for $2,980.

As of this writing (7-10-19), based on the many spy photos of C8 mule Corvettes seen in public, it appears that initially there will be two unique wheel designs. We also do not yet know the sizes of the wheels or how many different finishes will be offered. While the C8 debut is scheduled for July 18, 2019, we might not know the intricate details of option prices for a while.

It will be interesting to see if the C8's wheel/tire combos will be larger than those used on the base model C7 car. From a performance standpoint when it comes to wheels, there's only one more rung on the high tech ladder: carbon fiber. Carbon Revolution, an Australian company claims a 60-pound weight savings on their Mustang GT350 project car. Carbon fiber is still very expensive. In 2017, it was reported that carbon-fiber wheel prices were coming down, but still cost around $12,000 for a set. If Chevrolet offers a Z06, ZR1 or Zora edition of the C8, don't be surprised if you see carbon-fiber wheels. Maybe someday, a future Corvette will have a carbon-fiber chassis as well.